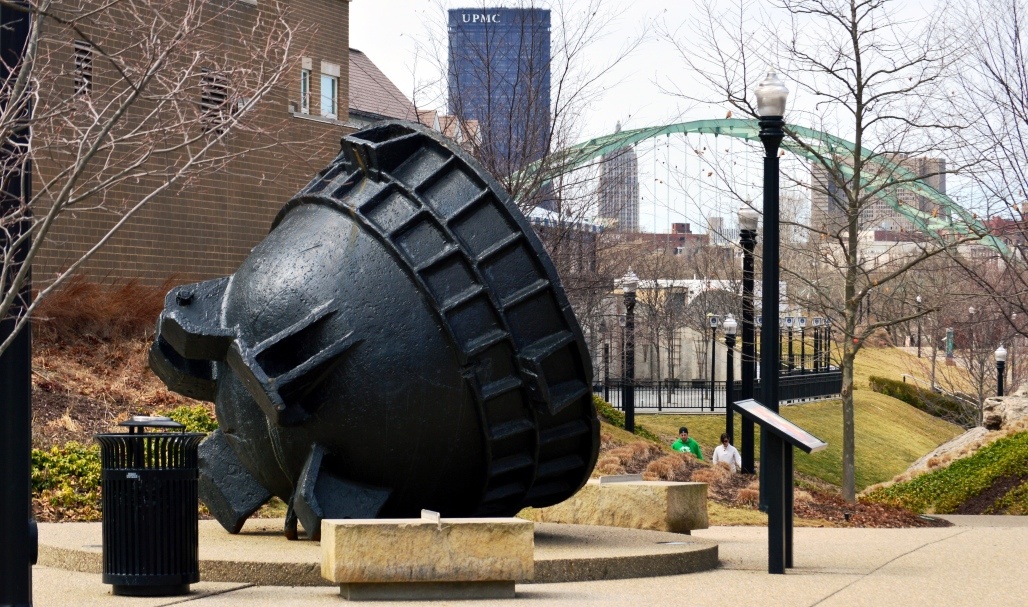 For over 140 years, the Jones & Laughlin Company defined Pittsburgh, Pennsylvania’s riverfronts at their grittiest.

Viewed through the haze of smoke along the Monongahela River, the steel mill’s enormous blast furnaces and neon sign were Pittsburgh landmarks. 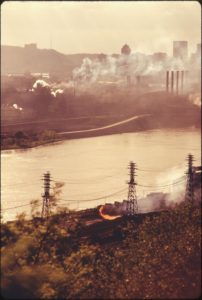 At its peak, the mill employed over 42,000 workers from the surrounding neighborhoods, producing iron and steel for nails, rails, artillery, and automobile and machine parts.

J&L’s closure in 1984 was a part of the devastating implosion of the steel industry that battered Western Pennsylvania. A third of Pittsburgh’s population moved away to seek work in other cities and steel brownfield sites sat empty.

As the city slowly rebuilt itself during the 1990s, opportunities for rebirth emerged along the riverfronts.

When Riverlife was founded as a task force in 1999 to create a community vision for reclaiming Pittsburgh’s riverfronts, the efforts for park and trail building were largely centered around the downtown “Golden Triangle” area.

But as that area was successfully developed and access to the riverfronts in the central business district was established, Riverlife’s sights shifted to extending the riverfront experience up the Monongahela River.

South Shore Riverfront Park now sits on the southern bank of the Mon on the former J&L Steel site next to the SouthSide Works retail and residential development.

In many ways, the park is an symbol of Pittsburgh’s 21st century reemergence; a recognition of a difficult history mixed with necessary reinvention.

Situated next to the Hot Metal Bridge—so named for the molten steel that was once shuttled across it in rail cars—South Shore has been reclaimed as a public green space that nods to the city’s industrial past. 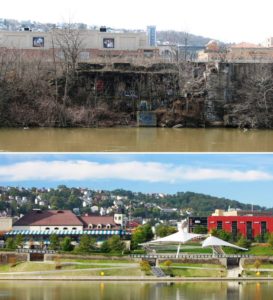 Above: The SouthSide Works retail complex can be seen over the industrial riverbank prior to the construction of South Shore Riverfront Park. Below: The park, shown after it opened in 2012, cut through the riverbank wall to provide water access and a public boat dock. Images by Riverlife.

Opened to the public in 2012 after several years of planning, fundraising and construction, the park came to life through a partnership project among the City of Pittsburgh, Urban Redevelopment Authority (URA), Riverlife and The Soffer Organization.

The park was designed by Environmental Planning & Design.

To the left, the top photo shows an industrial riverbank wall overgrown with weeds and covered in graffiti.

Lower photo shows the same area after a riverfront park was constructed, with a series of paths leading to the water, green grass, a red retail building and beer hall building flanking an outdoor stage with two white awnings.

One of the largest was excavating through the industrial riverbank and remaining mill infrastructure to connect park users to the water while establishing a key trail connection for the Great Allegheny Passage.

The park was designed to straddle an active railroad tunnel and overcome a 40’ drop in elevation to provide access to the river and a public dock for boats. 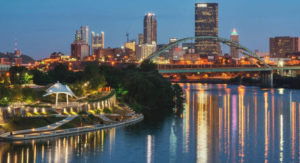 For generations, it had been nearly impossible for the average Pittsburgher to reach the water at the site; now thousands of annual users ride or walk right next to the river. Many are on their way to or from Downtown and the western terminus of the 150-mile GAP trail.

South Shore Riverfront Park pays tribute to the site’s history of steelmaking, incorporating into its design a 160,000-pound ladle for molten steel and a restored pumphouse structure that once sent water from the Mon up to the mill site.

South Siders recall stories about steel workers killed in on-site accidents; legend has it that an 8-foot tall steel ingots were cast and buried in their memory.

Unearthed during the park’s construction, several ingots are displayed along the park’s riverfront trail as tributes to the countless men and women who made their livings in Western Pennsylvania steel.

Featured photo of steel ladle is by Ehren Zaun.

Learn about other riverfront projects that changed the face of Pittsburgh.

This article originally appeared on the Riverlife website. Reprinted here (with minor edits) by permission.