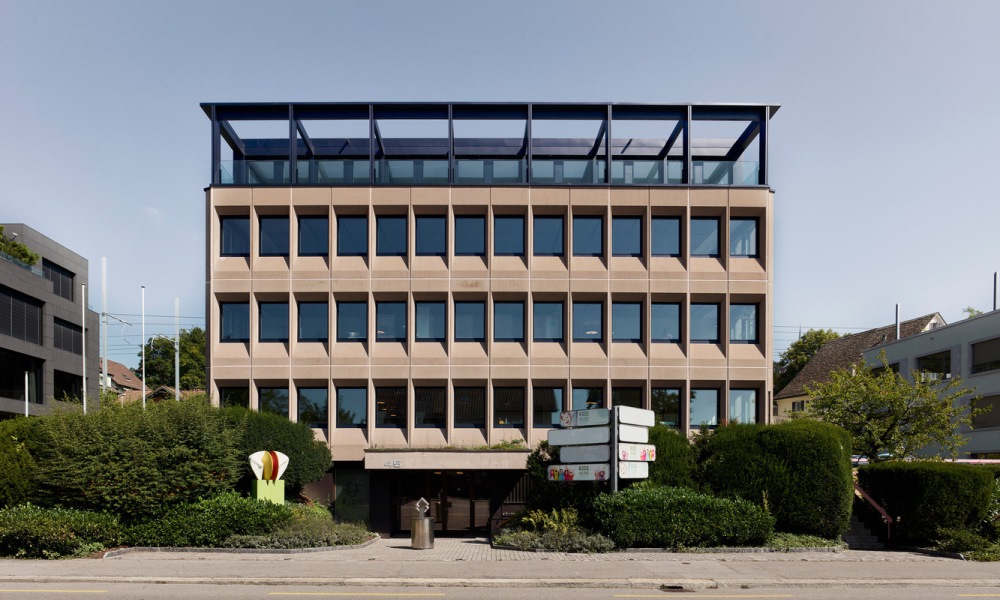 This commercial building, constructed in 1978, is located in the municipality of Zollikon on the shore of beautiful Lake Zurich in Switzerland. It is flanked by the Seestrasse to the west and the railway tracks to the east.

The building has been renovated and repurposed, and a full story has been added to the overall volume.

In addition, two stories inside the building will be converted into a kindergarten as part of the transformation.

The architects at Architekt.innen say this about the process of rebirthing the building: 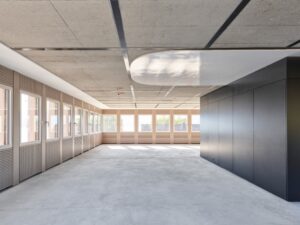 The extension makes strong reference to the tectonics of the existing building – its rhythm is continued in the attic story.

The elevation of the window openings and the change of material from concrete to steel form a clear conclusion to the existing main body.

The result is a characteristic division into the base, main and attic volumes.

In the west, the building envelope detaches itself from the primary structure and creates space for a generous terrace with a view of the lake via setback. 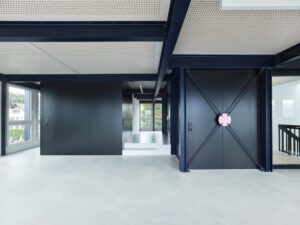 In keeping with the structural concept of the existing building, with its load-dissipating prefabricated- ted concrete façade, the load-bearing core, and the floor slabs spanning freely in between, the vertical load transfer of the extension follow the same structural principle.

The extension in steel-wood hybrid construction spans the entire floor plan, including the pergola structure, and thus guarantees that no loads are transferred to the existing floor slab.

The ceilings and core walls on the existing floors will be upgraded. The concrete ceilings are left visible, whereas the core walls are clad with black MDF.

The dark cladding in the center of the free floor plan is contrasted with the light, sand-colored cladding on the inside of the façade. It provides a counterbalance and also makes an important contribution to a concerted feeling of space with its acoustic perforation. 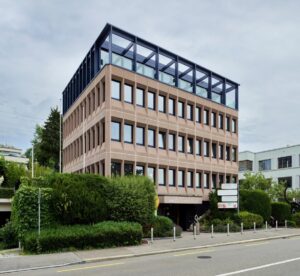 Just like the extension of the kindergarten, the retrofitted flat expansion on the attic floor is based on the principles of the existing building. The access core is extended in terms of space.

On the one hand, this takes the form of directly adjoining rooms or – in the case of the flat – by means of free-standing wet rooms, which are connected to the core in the center via a built-up topography of acrylic stone.

Room-high swing and sliding doors that can be opened 180° allow various room configurations to meet the different needs of everyday life.

For example, the side rooms open to the faça- de can be closed off to form compact chambers that zone the open floor plan. Along the façade and the core, a flowing space is created that allows the characteristics of the „plan libre“ to continue to be experienced spatially in its generosity.

All photographs are by Markus Bertschi Fotografie.