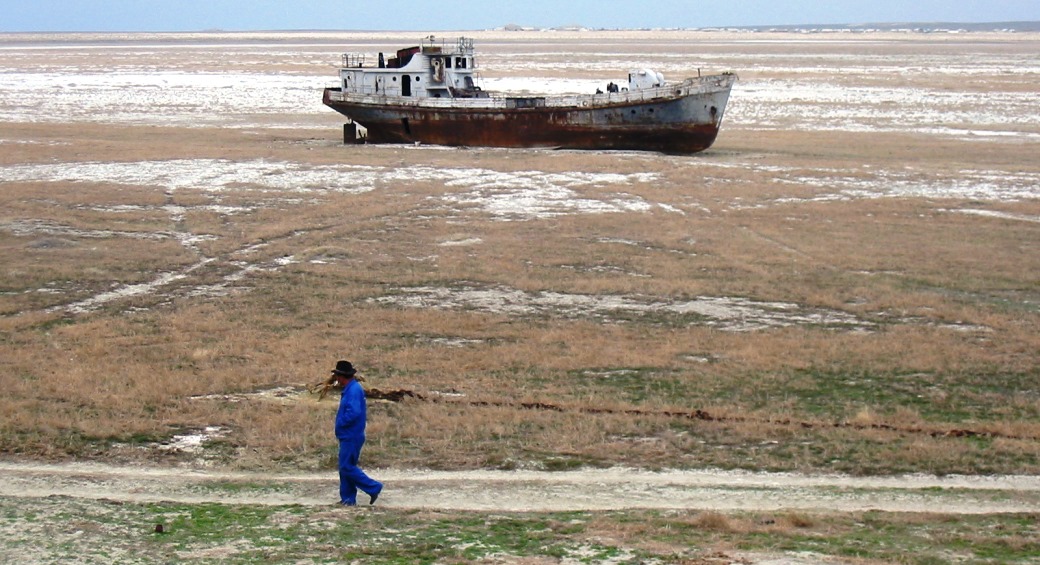 Four thousand kilometers away from the UNECE headquarters in Geneva used to lie the Aral Sea. It was the fourth biggest lake in the world…in fact the lake was larger than Switzerland.

But if we traveled there today, we would only find a desert as the lake has dried out. The Caucasus and Central Asia are sometimes overlooked in global discussions about climate change and environmental challenges. However, as the example of the Aral Sea shows, the region’s fragile landscapes and ecosystems have suffered from century-long excessive extraction and waste of water, overcutting of forests, and pollution from mining, which has in turn led to desertification, soil loss, and land erosion.

“These changes are not only worsening the living conditions of the population but also increase greenhouse gas emissions, which worsen climate change, ultimately threatening already fragile ecosystems further,” points out Mr. Ekrem Yazici, Deputy Chief of the UNECE/FAO Forestry and Timber Section.

States in the region have recognized that common challenges like these can best be overcome through cooperation and concerted action. In the margins of the joint 77th session of the UNECE Committee on Forests and the Forest Industry (COFFI) and the 40th session of the FAO European Forestry Commission (EFC) at the Palais des Nations in Geneva, experts from Armenia, Georgia, Kazakhstan, Kyrgyzstan, Tajikistan and Uzbekistan met in December of 2019, to work-out a country-owned regional greening strategy for the first time.

The strategy is aimed at landscape restoration and greening the infrastructure of countries of the Caucasus and Central Asia.

Overall the region has already pledged to restore over 3 million hectares of forest landscapes by 2030 under the Bonn Challenge. This area could be much bigger if funding can be secured. The core idea of the new greening strategy is to increase funding for landscape restoration by leveraging funds for green infrastructure development.

As the Caucasus and Central Asia region is developing its infrastructure rapidly, through initiatives such as the Belt and Road Initiative, there is growing momentum to sharpen attention on the environment as well. Landscapes could be restored and greened while the infrastrucure is developed. If only a small percentage of the infrastructure investments were redirected to enviornmental causes, the benefit for the region would already be significant.

Mr. Vardan Melikyan, Deputy Minister of Environment of Armenia and vice-Chair of the UNECE Committee on Forests and the Forest Industry, stated “we expect that the Strategy will help us to scale up goals, actions, investments and collaboration on landscape restoration and facilitate cooperation with international partners and hope to endorse it in 2020. We are also looking forward to cooperation with UNECE and FAO member States, as well as with both organizations.”

Restoration and greening efforts like those foreseen in the strategy are an important, nature-based step in the fight against climate change. Reversing land degradation can provide more than one-third of the mitigation required by 2030 to remain below 2°C increase in average global temperatures.

The strategy thus echoes the United Nations General Assembly (UNGA) decision to proclaim 2021-2030 as the Decade of Ecosystem Restoration. Moreover, the strategy builds on earlier regional efforts to restore forests and degraded landscapes undertaken as part of the Bonn Challenge and Astana Resolution endorsed at a Ministerial Roundtable hosted by Kazakhstan in June 2018.

Aligned with the 2030 Agenda for Sustainable Development, the strategy underlines the importance of coherence with existing conventions and agreements, including Multilateral Environmental Agreements serviced by UNECE like the Espoo Convention (which supports transboundary environmental impact assessment) and the Water Convention (which supports the sustainable management of shared water resources).

Photo of abandoned ship near Aral, Kazakhstan is by Staecker (via Wikipedia).

This article originally appeared on the UNECE website. Reprinted here (with minor edits) by permission.