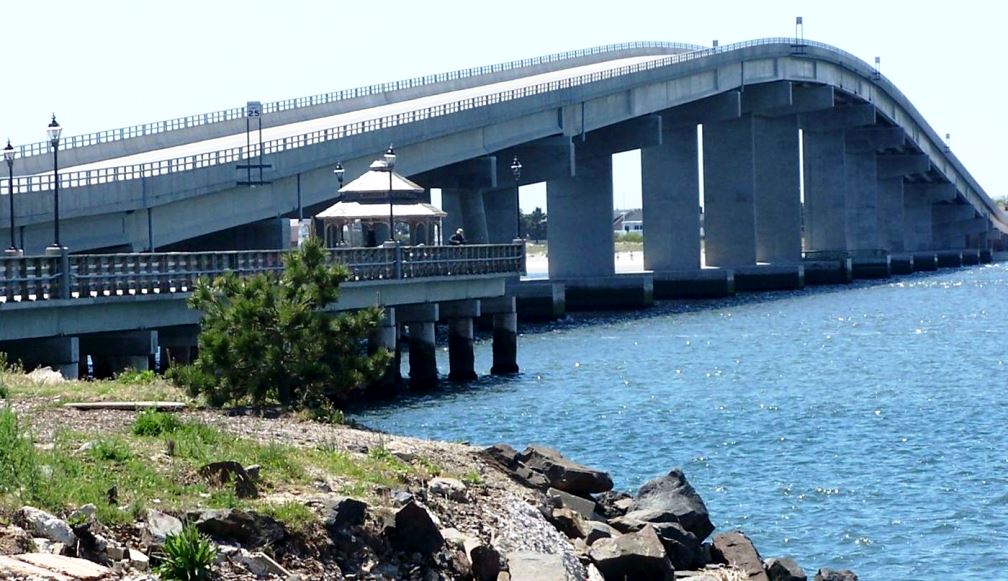 The shamefully-vast infrastructure renewal deficit in the United States is mostly the result of the failure to increase gasoline taxes, thanks to state and federal politicians owned by the oil companies. It has been well-documented in the past two decades, partly via the annual “report card” from ASCE (American Society of Civil Engineers), and partly via books such as 2002’s The Restoration Economy.

While federal efforts to close the deficit tend to get all the attention, many states and even counties are tired of empty promises, and are taking matters into their own hands, usually with some federal help. We’ve documented many state-level efforts (such as Pennsylvania’s and Illinois’) here in REVITALIZATION. Now, here’s an example of a county-led effort.

On August 26, 2020, the County of Cape May (New Jersey)—in partnership with the Cape May County Bridge Commission—announced a comprehensive fifteen-year plan for the replacement, rehabilitation, and improvement of County-controlled bridges. The Board of Chosen Freeholders unanimously adopted the plan at their meeting on August 25, 2020, an action that officially marks the County’s commitment to the endeavor and begins the implementation process.

“The adoption of the Comprehensive Bridge Replacement and Improvement Plan is the culmination of nearly two years of hard work by a great team of dedicated and competent people,” said Cape May County Freeholder Will Morey, who is the Freeholder liaison to the County’s Public Works and Engineering Departments, as well as liaison to the Bridge Commission.

“The plan establishes a fiscally responsible path forward for the realization of what has been previously and frequently debated but struggled to advance: the thoughtful and responsible restoration of our critical bridge infrastructure. The original construction of these bridges, a few built nearly 90 years ago, included a vision for the interconnection of barrier island and mainland locations that has become the fabric of our Cape May County community and economy. Our comprehensive plan will restore and build upon that vision by providing a modern and reliable bridge infrastructure for the next 75 plus years,” he added.

The County owns and operates 23 bridges and has invested over $30 million in State and County funds for bridge maintenance, repairs, reconstruction, and replacement over the last 10 years. This includes the re-decking of bridges, substructure repairs, superstructure repairs, electrical upgrades, and guide rail replacements.

The County’s bridge inventory consists of several types of bridges including fixed span, movable bascule spans, and culvert type bridges that were constructed between the 1930s and the 1980s. There are four bridges owned and operated by the Bridge Commission, constructed between 1930 and 1939, that have reached the end of their service life and are in need of accelerated replacement or substantial rehabilitation.

“But the time has come to upgrade the structures to ensure that they will last for many, many decades to come and provide the people of Cape May County with a reliable transportation infrastructure that connects the communities and helps our economy. Over the past two years, the County has already begun to implement modest portions of the bridge plan thru several rehabilitation projects. These projects are intended to address current safety issues and extend the longevity of the existing structures in order to minimize concurrent capital expenditures in the future,” he continued.

Much of the work done to create the Comprehensive Bridge Replacement and Improvement Plan was handled by in-house County professionals who, working alongside their colleagues at the Bridge Commission, created the plan to guide County leadership for the next decade and beyond.

“The extensive, well invested time over the past nearly two years researching our bridges and analyzing our maintenance program has led to the adoption of what is now a guiding document,” said Nancy Mauro, the Public Works Administrator. “This is the first comprehensive plan of its kind put together by the County in partnership with the Bridge Commission and sets us on a course for the complete restoration of this critical infrastructure over the next fifteen years.”

The most recent County bridge to be replaced was the 17th Street Bridge in Ocean City in January 2019. A portion of this investment has been offset through reimbursements back to the County from the State’s Local Bridges Future Needs (LBFN) program. The County intends on continuing to utilize State LBFN funding, State County Aid funding, Federal funding, and the State of New Jersey Infrastructure Bank loan funding (NJ I-Bank).

Currently, the County has secured one of the largest I-Bank Loans in the State which is helping to offset the costs of the ongoing Ingram’s Thorofare Bridge re-decking project. The County is also exploring the possibility of private investment in the program. Since the careful development of this plan began over 16 months ago, the Covid-19 pandemic has emerged and disrupted life as well as the National, State, and County economies in a heretofore unseen manner. As a result, the level of economic disruption is not yet entirely known, therefore, each commitment of funding and/or bonding will first come before the Board of Chosen Freeholders for approval.

“This type of infrastructure in Cape May County is utilized by people from all over the world and helps to drive our tourism industry,” said Carol Brand, Chairwoman of the Cape May County Bridge Commission. “As embodied in the plan, we will aggressively seek cost sharing relationships with state and federal agencies so as to prevent any significant burden on Cape May County taxpayers, but it is our intention to move diligently to replace and repair our bridges as detailed in the plan.”

Fortunately, the County put the first element of its financing plan in place beginning in 2017 by annually dedicating a portion of its tax levy toward the bridge project. By continuing to do so—and by carefully phasing design and construction over a 15-year period—the County is able to responsibly complete these very substantial and critical infrastructure replacements and improvements with modest and manageable effect on County taxpayers.

“Three years ago, after hearing Freeholder Morey’s concept for bridge projects, I suggested we begin to create a fund to draw from for the initiation of a broader bridge infrastructure program,” said Freeholder Director Gerald Thornton.

“This impressive comprehensive plan sets us on a course for replacement and improvement of our bridges that will serve future generations in Cape May County. The Board of Chosen Freeholders will move responsibly and with our taxpayers squarely in mind, because I think everyone understands our broad mutual interests in the safety and reliability of our bridges,” he concluded.