Back in August of 2017 Paula Meli, a restoration ecologist and researcher at the University of São Paulo in Brazil, flew to Buenos Aires to join 30 other scientists in a meeting with Argentinian officials.

“Argentina was developing their national restoration plan,” Meli said. “They needed us to define forest degradation, levels of degradation and indicators to measure these levels. It was interesting: I’ve never been in a situation where the government was so open to receive information.”

But what could have been a smooth meeting turned into a drawn out debate over a single definition. “My community spent several hours arguing over the term ‘forest degradation,’” Meli said. She remembers officials waiting patiently, some saying, “My God, are they going to agree on something or not?”

For Meli, the anecdote exemplifies a culture clash that occurs in Latin America, and possibly other regions of the world. The players? Restoration ecologists versus the gamut of professionals, leaders, and communities they now need to work with but don’t necessarily have experience working with.

It’s a long list that straddles many spectra: from a family squatting on the border of a forest protected area to presidents, prime ministers and international civic society leaders. All are stakeholders that have different expectations and needs.

Over the last two decades, Latin American countries pledged commitments to restore at least 53 million hectares of degraded lands by the year 2020, creating a high demand for ecological restoration professionals in the region.

Other regions of the world pledged commitments to the same treaties. But Latin America’s commitments are widely regarded as ambitious. James Aronson, a restoration ecology scientist at the Missouri Botanical Garden in the U.S., thinks that restoration professionals from other parts of the world can learn from Latin America and how it handles challenges in fulfilling its commitments. He said, “It’s well worth emphasizing that Latin America is a real incubator where people are grappling with all of this complexity.” 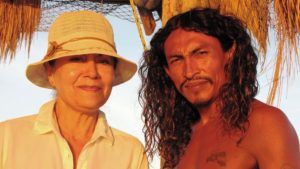 Latin America spans Mexico’s arid border lands in the north to Chile’s Antarctic islands in the south. Twenty-four countries and five dependent territories make up the region, and its ecological biomes are as diverse as its cultures, languages and social systems. This means Latin Americans “have to deal with complex and challenging ecological and social conditions in restoring our ecosystems,” Meli said.

Meli and her colleagues, Daniella Schweizer in Switzerland, Pedro H. S. Brancalion in Brazil, Carolina Murcia in Colombia, and Manuel R. Guariguata in Peru, wondered if restoration professionals in Latin America had the right skill sets to begin with.

The ecological dimension typically covers concepts and techniques in reestablishing the long-term health and self-sustainability of ecosystems. The socioeconomic dimension covers the technical aspects of involving a project’s stakeholders, a project’s total economic cost-benefit ratio and other legal and institutional issues. It also covers issues such as social equity and conflict resolution, which could have come in handy during that five-hour debate on the definition of forest degradation. Meanwhile, the management dimension includes project planning, implementation, monitoring and documentation, outreach and communication, and financial administration.

To get a grasp of the region’s training in ecological restoration, Meli and her colleagues sent out an online survey—in Spanish and Portuguese—to their national and regional restoration networks; their own professional networks of researchers and practitioners; and via the World Conference on Ecological Restoration held in Brazil in September 2017.

They wanted to know what kinds of restoration professionals are working on terrestrial ecosystems across Latin America and which systems they focus on; what kinds of training they received in the multiple dimensions of ecological restoration; and what they perceive as constraints and curriculum needs for professional training.

The survey results, recently published in the journal Restoration Ecology (read the Spanish translation of the paper here), showed that half of the respondents work in academia while also working in or with governments and nongovernmental organizations, and most of the respondents focus on forest ecosystems. They also have similar education levels, with most having completed postgraduate degrees.

In terms of training, over 80 percent of the respondents received formal academic training in fields relevant to restoration and most reported attending interdisciplinary courses. However, their training was more focused on the ecological dimension of restoration, as opposed to socioeconomic or management dimensions.

And when it comes to further training, the respondents wanted opportunities that were flexible about time and commitment, such as short courses or intensive workshops. They wanted affordable training fees, financial aid, and more options on course locations.

Meli thinks the survey results affirm that although courses on the different dimensions of ecological restoration are available in Latin America, restoration professionals feel they need to invest more training in the socioeconomic and management dimensions. “Then again, getting training is not the only solution,” Meli said. Restoration professionals need to get better at working in diverse teams and collaborating with other professions. “We need to reinforce our interdisciplinary work,” she added. 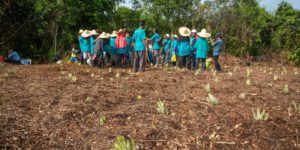 That most of the respondent’s training were in the ecological dimension of restoration was not surprising, given the survey’s sample. However, Aronson said this also true for many other parts of the world. And this training focus can have implications in the way restoration professionals design and implement projects.

“In 2010, a bunch of us did a survey of literature from 2001 to 2008, and it showed that less than 5 percent of the papers published on ecological restoration in peer-reviewed journals dealt with socioeconomic factors,” Aronson said.

In that paper, Aronson and his colleagues “found clear evidence that restoration practitioners are failing to signal links between ecological restoration, society, and policy, and are underselling evidence of the benefits of restoration as a worthwhile investment for society.”

In a more recent study, Australian researchers found the social outcomes of restoration are rarely measured in projects. The 2013 literature survey showed less than 3 percent of restoration projects reported including an assessment of socioeconomic aspects.

Why has the field taken so long to incorporate these non-ecological dimensions of restoration? Cara R. Nelson, a professor of restoration ecology at the University of Montana, thinks it stems from a historical focus on the ecological goal of restoration, which is “to remove degradation and return the system to the state it would have been in if a degradation had not occurred.”

That means many restoration professionals have a tendency to “focus on the ecosystem,” Nelson said. “The first things they think of are the ecological goals, despite the fact that restoration has the potential to achieve strong social goals. We need to emphasize that without consideration of the human dimensions of restoration, ecological goals are not likely to be met.”

However, global initiatives to restore degraded lands, such as the Convention on Biological Diversity in the early 1990s and the more recent Bonn Challenge, are challenging many restoration professionals to move beyond ecological goals. They are tasked with reversing degradation in large swaths of lands that affect a diversity of people and their social structures.

“It’s a really complex problem to figure out how to effectively repair degraded ecosystems at large spatial scales and to build social structures that are going to support those repair activities now and into the future,” Nelson said.

So, what is a young restoration ecologist to do to get the right mix of training? Meli and her colleagues recommend attending further training in multidimensional restoration and learning via collaboration across disciplines.

“It’s not a question of more knowledge,” Meli said. “It’s a question of vision. Being multidimensional does not mean you need three doctorate degrees. You need the vision to interact and share information with other people.” Meli added it’s also about working well in interdisciplinary teams trained in collaborating with diverse groups.

The Society for Ecological Restoration (SER), a US-based international organization that supports the global community of restoration professionals, recognizes the importance of directly addressing these multi-dimensional components and is highlighting that in an upcoming revision to their “International Standards for the Practice of Ecological Restoration.” (NOTE: REVITALIZATION publisher Storm Cunningham was one of the first 200 SER members. Cunningham profiled James Aronson in his second book, Rewealth, published by McGraw-Hill in 2008. Aronson hosted Storm and his wife, Maria Antonia, at his beautifully restored country home in Perpignon, France back in 2006.)

“The revised standards address the social components of restoration much more significantly than the first version did, including additional recognition as part of a set of new principles for ecological restoration,” said Bethanie Walder, SER executive director.

“Ecological restoration projects must be both ecologically and socially sound—not just one or the other, or they are unlikely to be successful,” Walder said. “It can be challenging to balance competing interests, but it might also be one of the most important components for ensuring success.”

Aronson thinks the situation is better today compared to two decades ago. “But there is still a long way to go,” he said. What the field needs may not simply be more training and better team work. It’s possible all these challenges are nudging the field to evolve in a certain way.

“The Meli, et al article has great merit, but it should be used as one piece of a puzzle,” Aronson said. “What’s needed is for restoration professionals to talk to broader audiences and to redefine disciplinary boundaries.”

Aronson envisions a restoration ecology that embraces other disciplines it needs to succeed: sociology, engineering, design, law, diplomacy, anthropology, business, linguistics, and so on. He said, “Hopefully this can happen in many different parts of the world and will grow into something new and beautiful over the next ten to 25 years.”

This research was supported by United States Agency for International Development (USAID).

Photo of forest waterfall in Thailand via Adobe Stock.

The original version of this article by Natasha Vizcarra originally appeared on the Forest News website of the CGIAR Research Program on Forests, Trees and Agroforestry, which is supported by CGIAR Fund Donors. Reprinted here (with minor edits and additions) by permission.