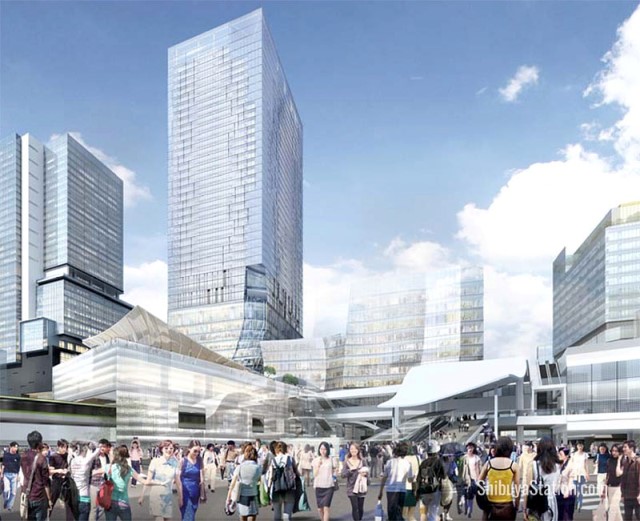 In Japan, Tokyo’s bustling neighborhood of Shibuya has a reputation as a fashion and pop-culture hub, drawing hordes of visitors from around Japan and further afield. Easily recognized for its lively and much-photographed scramble crossing, the area around Shibuya Station is undergoing a massive makeover ahead of the Olympic and Paralympic Games in 2020 that will reshape the look and feel of one of the metropolis’s most popular cultural and consumer enclaves. 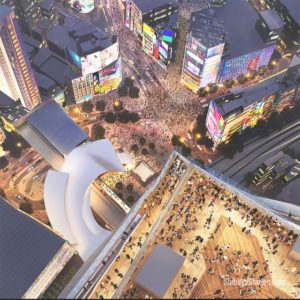 The long-term project has already been underway for some time, and once complete it will provide Shibuya with a new skyline of high-rise buildings and also significantly bolster the area’s infrastructure. Heralded as a once-a-century undertaking, the renovation is scheduled to be mostly completed in time to greet the influx of tourists and other visitors expected to descend on Tokyo for the Olympic and Paralympic Games in the summer of 2020.

Shibuya Station, a pulsing commuter hub housing a complex tangle of nine train and subway lines, is set to undergo a major revamp that will make it easier for travelers to navigate the sprawling terminal. This revitalizing ambition was reported here in REVITALIZATION back on 2015. Now, the redevelopment plan is complete, and action has begun. 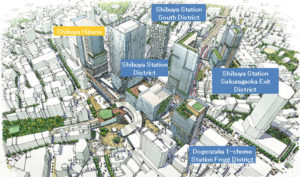 Shibuya is being re-engineered as an international business center for the 21st century. In the words of Shibuya Ward Mayor Ken Hasebe: “It may sound presumptuous, but I want people to think of Shibuya in the same way they do London, Paris and New York.”

Located along the western arc of the JR Yamanote loop line circling the heart of the city, Shibuya Station began in 1885 as a quaint suburban railway stop in what was once dairy farmland and tea fields. Lands to the north were home to U.S. military officials during the postwar occupation and later an athletes’ village for the 1964 Tokyo Olympics. In recent decades, the borough has been synonymous with the ever-changing fads associated with cool youth and fashionistas. 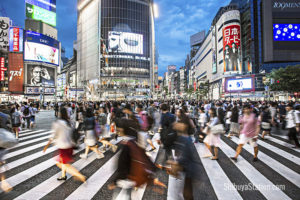 It’s also known for its enormous video screens on building facades, its riot of neon signs and its packed scramble crossing – on average, nearly 3 million passengers use the station on weekdays. The total effect, with its sudden sensory overload, has often been compared to the science-fiction classic Blade Runner.

The redevelopment project, however, promises to surpass cinematic fantasy as the station complex and surrounding buildings grow larger and taller while allowing even more people to throng the station and easily access all sides of it. 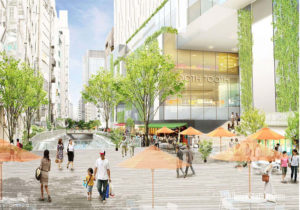 Developer Tokyu also aims to revitalize the little-known Shibuya River, currently a narrow chute behind buildings that’s lined with concrete and devoid of any greenery.

The river has been diverted and a large catchment tank has been constructed for heavy rain.

In an unusual move for Tokyo, the space along one part of the river will be opened up into a plaza with trees and a walkway for pedestrians. The skyscraper and surrounding area are slated to be complete in fiscal 2017, which ends in March 2018.