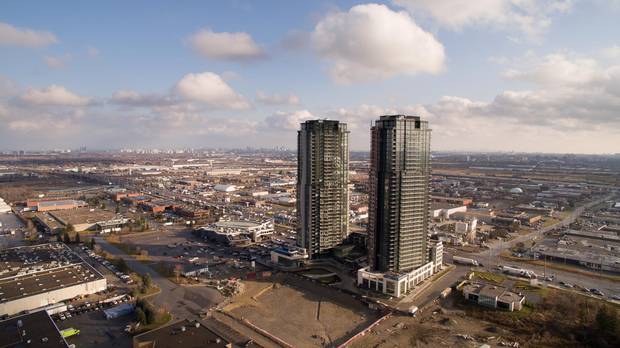 The sister condo towers sprout out of south-central Vaughan, Ontario like the first shoots of spring.

Surrounded by one- and two-storey industrial, commercial and retail buildings, the glassy high-rises make a big impression. It takes scanning the horizon for distant downtown Toronto to find any buildings that remotely compare to their 37 storeys.

The usual pattern is for cities to grow from their cores, adding density to the downtown while the suburbs expand outward. But Vaughan is doing it in the opposite direction. It’s a suburb now building its heart; reversing the pattern of growing out to growing up.

These towers, the first of five in a complex called Expo City and the tallest buildings in York Region, are the first manifestations of a plan to build a downtown from scratch. A KPMG building that will soon house 400 employees is the second.

The vision is closely tied to the $2.6-billion, 8.6-kilometre York-Spadina subway extension slowly tunnelling its way north from Downsview Station. It’s the first time Toronto’s subway has reached past the city limits, and will service Vaughan with about a 45-minute ride to Union Station.

Vaughan’s urban journey is unusual but not unique, says Patrick L. Phillips, global CEO of the Urban Land Institute in Washington, D.C. Congestion and its effects on climate change and declining quality of life is driving many American suburbs to be more walkable and city-like.

“Housing is the right place to start. The kind of density Vaughan is building sends a signal that they truly intend to do things differently.”

Retail, commercial and office development is sure to follow, fed by strong transit links. “And before you know it, you live in a real downtown.”