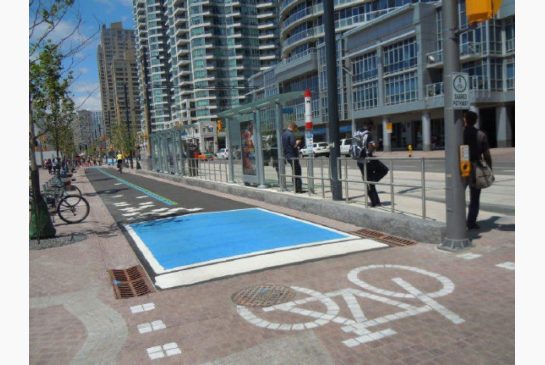 Democracy is messy; just take a look at the new Queens Quay, on a recently-revitalized stretch of the vast Toronto, Ontario waterfront (the world’s largest urban waterfront).

The recently-opened stretch between Bay and Spadina isn’t just the best new street in Toronto, it’s the most democratic.

Perhaps for the first time, the city has built a thoroughfare for everyone. That means pedestrians, cyclists, skate boarders, roller bladers, babies in strollers, transit passengers, wheelchair users and, yes, drivers.

It will take some getting used to.

Under the rigidly enforced hegemony of the car, the streets of Toronto are a no-go-zone to anyone not enclosed in several tonnes of speeding steel and plastic. The new Queens Quay says otherwise. It argues that the city is a place for all. It upends the conventional hierarchy and returns this critical part of the public realm to the people.

It strikes at the heart of Toronto, which measures its success by vehicular congestion rates.

And yet the mayor himself showed up for the celebration Friday night to smile and bask in the glow of a rare display of civic enlightenment. That would be the same John Tory whose plan to expand the Gardiner Expressway will set the city back decades, and who appointed his deputy, Denzil Minnan-Wong, to the board of Waterfront Toronto simply to block its progress…

Interestingly, some of the property owners decided against participating in the revitalization program and have ended up with their shabbiness fully exposed. The most painful example is the Radisson Admiral Hotel, an unpleasant modernist box best ignored. Its stretch of the sidewalk, cracked and crumbling, looks worse than ever.

“The project was about uniting many different spaces,” says Dutch landscape architect, Adriaan Geuze, whose firm West 8 did the Queens Quay redesign. “…the interface of public and private is difficult….but this is the future.”