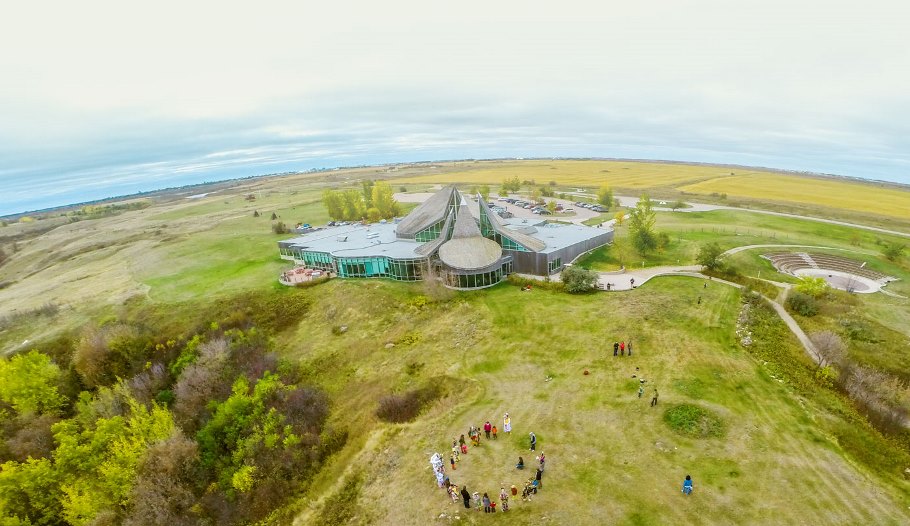 Six thousand years ago in what is now called the province of Saskatchewan, Canada, a site known as Wanuskewin echoed with the thundering hooves of bison and the voices of Indigenous peoples from across the Northern Plains; the land still echoes with these stories that Wanuskewin is proud to share with the people. The nomadic tribes who roamed the Northern Plains gathered on this site of natural beauty where today visitors can relive the stories of a people who came here to hunt bison, gather food and herbs and escape the winter winds. Walking in their footsteps, you will understand why this site was a place of worship and celebration, of renewal with the natural world and of a deep spirituality.

The story of Wanuskewin is just beginning to be uncovered. Some archaeological dig sites date back thousands of years making them older than the Egyptian pyramids; these sites provide clues to the daily existence of the early peoples. Tipi rings, stones cairns, pottery fragments, plant seeds, projectile points, egg shell fragments and animal bones all give evidence of active thriving societies. While some sites teach us about life thousands of years ago other sites like the ancient Medicine Wheel still remain shrouded in mystery.

Wanuskewin Heritage Park is a non-profit cultural and historical centre of the First Nations (known as Native Americans in the US). In the Cree language: Wanuskewin means, “being at peace with oneself“. The site is a National Historic Site of Canada due to the importance of its archaeological resources representing nearly 6000 years of the history of the Northern Plains peoples.

In 2016, it was announced that Wanuskewin intends to seek UNESCO World Heritage designation, which would make it the first World Heritage Site in Saskatchewan. If the park is granted the designation, it will join the ranks of the Grand Canyon, Yellowstone National Park and Vatican City, among many other iconic sites throughout the world.

The park has identified what it calls “four pillars” to represent renewal. At the heart of the plan is an effort to return bison to Wanuskewin. “The bison brought us to this valley and sustained us physically, spiritually and economically,” said Saskatoon Tribal Chief Felix Thomas. “Bringing back the bison represents healing for our communities. It will be a significant homecoming. By understanding their story of near extinction, we are able to better understand the stories of Canada’s indigenous peoples. Bringing back the bison will be symbolic of the recognition of Indigenous cultures in Canada.””

The park’s UNESCO application is part of its renewal project, which also involves “preserving the ecology and biodiversity of the site, expanding the land base to meet UNESCO’s criteria and returning a small herd of Plains bison to their native prairie habitat,” said a Wanuskewin news release.

Wanuskewin Heritage Park Authority (WHPA) is a non-for-profit organization governed by twelve Board of Directors that consists of both Aboriginal and non-Aboriginal members. The Directors are appointees from municipal, provincial and federal governments, the University of Saskatchewan, and First Nations communities.

In order to receive the UN designation, Wanuskewin needed more land. So, in the summer of 2016, the City of Saskatoon agreed to lease 375 acres of land at a cost of $1 per year for 99 years.

On February 9, 2017 an ambitious $40-million plan to revitalize the site was launched. On February 25, 2017, the park and interpretive center near Saskatoon received a $500,000 donation from TD Bank Group.

[Ironically, TD Bank is also funding the notorious Dakota Access Pipeline in the United States, which will contaminate water for some 17,000,000 Americans when it leaks (which pipelines always do). The nearby Standing Rock Sioux tribe has been heroically protesting the project, and have–as a result–suffered massive human rights violations by militarized police and private security forces hired by the oil company. The oil to be transported by the pipeline is a product of the world’s filthiest and most inefficient source: the tar sands of Alberta.]

WHPA is not a federal, provincial, or municipal park, but rather a stand-alone entity under provincial government legislation as per the Wanuskewin Heritage Park Act, 1997. WHPA has a Council that consists of Elders’ who represent the various First Nations communities who gathered in the Wanuskewin area. The Elder’s council ensures that the direction, planning and continuity of Wanuskewin are aligned with oral tradition and authentic cultural heritage. Operating income for Wanuskewin comes from a mixture of grants, park revenues, and donations.