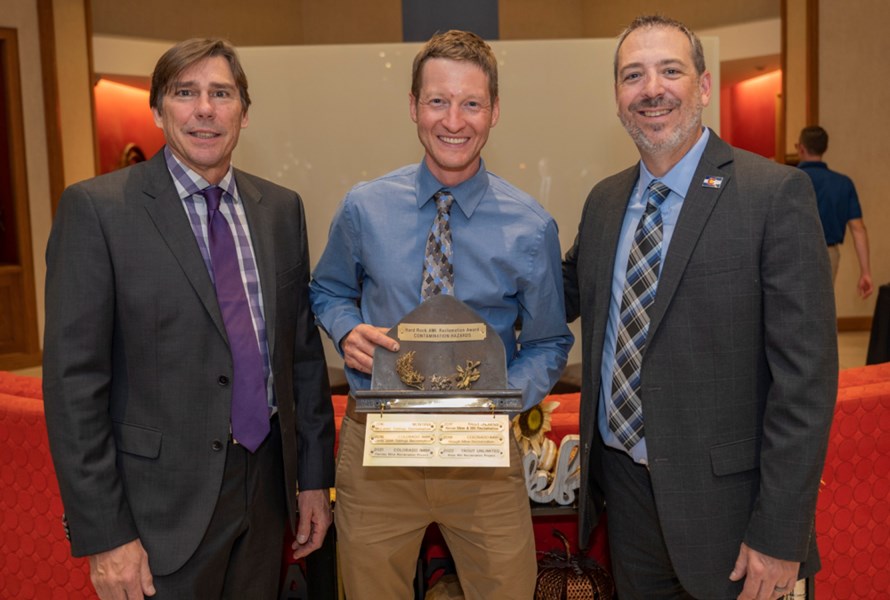 The award was for TU’s efforts in reducing contamination and restoring the environment on the Atlas Mill Reclamation Project.

The environmental cleanup of the Atlas Mill was completed through construction activities in October 2020. Of the approximate 8.8 acre Atlas Mill footprint, approximately 5 acres are federal land managed by the U.S. Department of Agriculture, Forest Service.

TU evaluated multiple amendment test plots over the course of one year with the best results being extrapolated for full-scale implementation during reclamation actions.

“This approach allowed TU to amend consolidated tailings in-place with the goal of native vegetation establishment that would reduce mobilization of contaminated material off-site. In total, 4.2 acres of tailings were consolidated and reclaimed, 1,689 feet of run-on/run-off channels were installed and 200 feet of Sneffels Creek was restored. This project also forged new ground by establishing one of the first Good Samaritan Administrative Orders on Consent between a non-governmental organization and the U.S. Forest Service,” said Jason Willis, Colorado AML Program Manager with Trout Unlimited, Inc.

Mining operations in the Uncompahgre watershed began in 1874 with the establishment of the Atlas Mine situated at the foot of Sidney basin near Ouray, CO in 1876. Atlas Mine operations included transportation of ore via aerial tram to the Atlas Mill approximately 500 vertical feet below the mine opening.

The Atlas Mill site features remnants of the historic mill structure, coarse-grained waste rock and fine-grained tailing deposits. The tailings were partly located within the riparian wetland associated with Sneffels Creek and presented concerns of mobilization of these contaminated materials off-site during rainfall or snowmelt events.

Founded in 1995, the National Association of Abandoned Mine Land Program is a group of AML professionals made up of federal government, states, tribes and partner organizations.

The Remediating Contamination award is nationally given out annually to a winning project and organization.

“We are excited to be part of this collaboration with our partners and it’s a great example of coming together to get critical work completed on the ground. Congratulations to Trout Unlimited, this award is well deserved,” said Curtis Cross, Forest Engineer.

TU is no stranger to the Hardrock AML Reclamation Award, having previously received the award in 2017 for their efforts on the Akron Mine project.

BE A GREAT LOCAL LEADER
IN JUST TWO MINUTES.
Link Your Mission To A Brighter Future For All.
Become the Local
RISING PLACES Sponsor.