The 1921 Tulsa Race Massacre took place on May 31 and June 1, 1921, when mobs of whites attacked black residents and businesses of the Greenwood District in Tulsa, Oklahoma. It was one of the worst incidents of racial violence in the history of the United States. 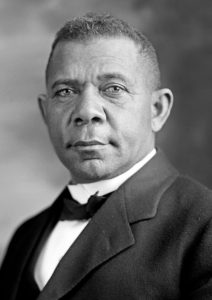 Greenwood was a district in Tulsa organized in 1906 following Booker T. Washington‘s 1905 tour of Arkansas, Indian Territory and Oklahoma. Greenwood became so prosperous that it came to be known as “the Negro Wall Street” (now commonly referred to as “the Black Wall Street”).

Blacks had created their own businesses and services in this enclave, including several grocers, two newspapers, two movie theaters, nightclubs, and numerous churches. Black professionals, including doctors, dentists, lawyers, and clergy, served their peers.

Most blacks lived together in the district and during his trip to Tulsa in 1905, Washington encouraged the co-operation, economic independence and excellence being demonstrated there.

Greenwood District was formally established in Tulsa in 1906 as the namesake of the Greenwood District that Washington had established as his own demonstration in Tuskegee, Alabama five years earlier. In Tulsa They selected their own leaders and raised capital there to support economic growth. In the surrounding areas of northeastern Oklahoma, blacks also enjoyed relative prosperity and participated in the oil boom. 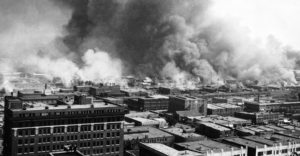 Photo of Greenwood burning in 1921 via the Library of Congress.

The 1921 massacre was by whites who were apparently jealous and insecure that blacks had the intelligence and drive to accomplish so much more with so much less. The attack came both from the ground and by air, destroying over 35 blocks of the district, which was then the wealthiest black community in the United States.

More than 800 people were admitted to hospitals and more than 6,000 black residents were arrested and detained, many for several days. The Oklahoma Bureau of Vital Statistics officially recorded 36 dead, but the American Red Cross refused to report black deaths. When a state commission re-examined events in 2001, its report estimated that 100-300 African Americans were killed in the rioting.

The riot began over Memorial Day weekend after 19-year-old Dick Rowland, a black shoeshiner, was accused of assaulting Sarah Page, the 17-year-old white elevator operator of the nearby Drexel Building.

After he was taken into custody, some blacks worried that Rowland was at risk of being lynched. A group of armed black men rushed to the police station where the suspect was held; there they encountered a crowd of white men and women. A confrontation developed, shots were fired, and twelve people were killed, ten white and two black.

As news of these deaths spread throughout the city, mob violence exploded. Thousands of whites rampaged through the black neighborhood that night and the next day, killing men and women, burning and looting stores and homes. About 10,000 black people were left homeless, and property damage amounted to more than $1.5 million in real estate and $750,000 in personal property ($32 million in 2019).

Many survivors left Tulsa. Black and white residents who stayed in the city were silent for decades about the terror, violence, and losses of this event. The riot was largely omitted from local, state, and national historical records. It was rarely mentioned in history books or classrooms, so blacks and whites alike grew up totally unaware of what had taken place. 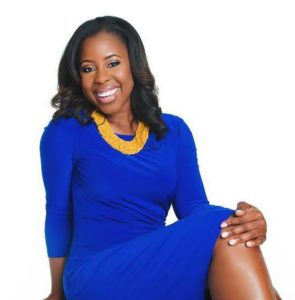 Today, in 2019, Tulsa looks a bit different.  We’ve reported several local revitalization efforts over the years here in REVITALIZATION, such as here, here and here. There was also an article specifically about revitalizing Black Wall Street.

Now, as Tulsa prepares to commemorate the massacre’s centennial in 2021, new community leaders are stepping up to the plate to revitalize the Greenwood neighborhood and create a sense of unity and understanding between two communities that were divided from the aftermath of the massacre.

Several of women-of-color leaders and activists are doing their best to cleanse Tulsa of the sinister underbelly that was established in 1921.

An example is Carolyn Sickles, Director of the Tulsa Artist Fellowship program. Another is Ashley Phillipsen, Deputy Chief of Community Development & Policy for the City of Tulsa. 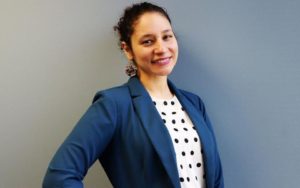 Together, they are currently doing much of the work needed to revitalize Tulsa, almost a century after the massacre.

Not so much focused on typical revitalization efforts around buildings and infrastructure, these women are committed to working on more complex core issues such social justice, criminal justice, education reform, and inclusivity.

In the Forbes interview linked to below, Marcia Bruno Todd says, “I’m essentially a connector of people and resources. It’s amazing. It’s my most liberating act of social justice and community building that I can do and that’s what I do at Leadership Tulsa. Our mission for our organization is to identify, develop and connect diverse leaders so they can make an impact on our community through service. I started in higher education, social justice work through diversity and inclusion and now through leadership development. From my understanding, how I was first introduced to Leadership Tulsa was through the Hispanic Leadership Institute in partnership with the Greater Tulsa Hispanic Chamber of Commerce. The Greater Tulsa Hispanic Chamber of Commerce identified the need that needed younger Latinx people to serve in leadership positions across Tulsa. Nothing ever existed like this in Tusla.”

Read Dominique Fluker’s interview with these 3 women in FORBES.