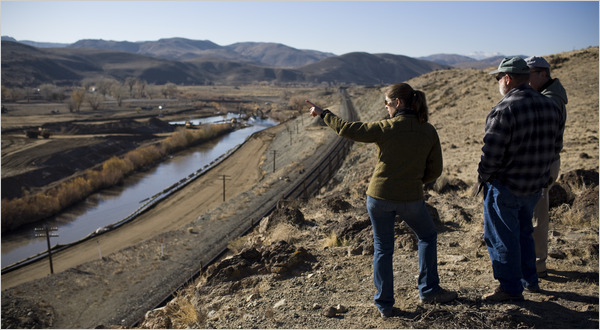 Note from Storm: This 2009 New York Times article describes a project by The Nature Conservancy to restore a stretch river that was killed by the U.S. Army Corps of Engineers. [Killing American rivers seems to have been their primary mission throughout the 20th Century.] If any REVITALIZATION readers in northern Nevada would care to bring us up to date on the ecological condition of this property, please do so in the Comment section below.

From the article: Watching bulldozers pour crushed rocks to force the Truckee River into a more natural serpentine pattern, Mickey Hazelwood, project director for the Nature Conservancy, mused that like many acts of salvation, this one has its roots deep in sin. The earth might not have moved, but the brothel has, leaving the river behind.

For decades, this high-desert site eight miles east of Reno was best known as the home of the Mustang Ranch, the first licensed brothel in the United States. From thin to plump, dwarflike to Amazonian, women hired to suit a range of tastes would line up for inspection by clients in pink stucco buildings tucked into a cottonwood grove 300 yards from the river’s bank.

The brothel reopened a few miles downriver in 2006, after the land was confiscated by the Internal Revenue Service and the name and buildings were sold to the highest bidder. Working 12-hour shifts at their new complex, part of which was airlifted from the old site, the women still greet customers in knee socks, push-up bras and other intimate wear.

The old property, meanwhile, is undergoing a transformation. Workers are restoring it to floodplain, undoing the damage wrought when federal engineers straightened the Truckee River a half century ago.