In Connecticut, the cities of New London and Groton are tackling redevelopment efforts in areas separated by the Thames River, but connected by the Gold Star Memorial Bridge that they share.

Completed as a single span in 1943, the Gold Star Memorial Bridge carries both Interstate 95 and U.S. Route 1 across the Thames River between New London and Groton. The bridge is actually a set of twin bridges, but they are generally spoken of using the singular “bridge;” the local media and residents refer to it as “The Goldstar.” 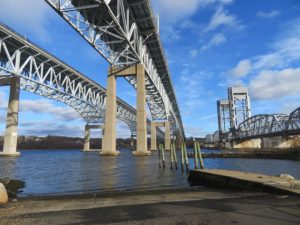 Now, a joint effort involving projects at each end of the bridge—-Hodges Square in New London and along Thames Street and Bridge Street in Groton—is dubbed the Thames River Reconnection.

The idea behind the grant is to create places where talent wants to be, and consultants are trying to build complementary assets with the centerpiece being the Thames River, says Kevin Hively, owner of Ninigret Partners and lead consultant on the project. 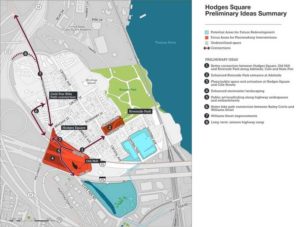 They want to turn Thames Street—the historic downtown of the City of Groton—and Bridge Street into a destination, by looking at ways to revitalize the area, from zoning to transportation.

The neighborhood is slated to be part of a Tax Increment Financing (TIF) district, which will go to public hearing in September.

The region, though it has economic challenges that would need to be worked through, also presents an opportunity for redevelopment, with its relatively inexpensive real estate and coastal location, along with the leadership exhibited by the communities and desire among people to be in more urban, amenity-rich areas, Hively says.

“I think this is one of the best long-term investment opportunities, because it’s one of the few remaining urban locations, basically from New York to Portland, that hasn’t been redeveloped in a major, major way,” concludes Hively.

Featured panoramic photo of Gold Star Memorial Bridge is by Victor-ny via Wikipedia.

See full article by Greg Smith and Kimberly Drelich in The Day.