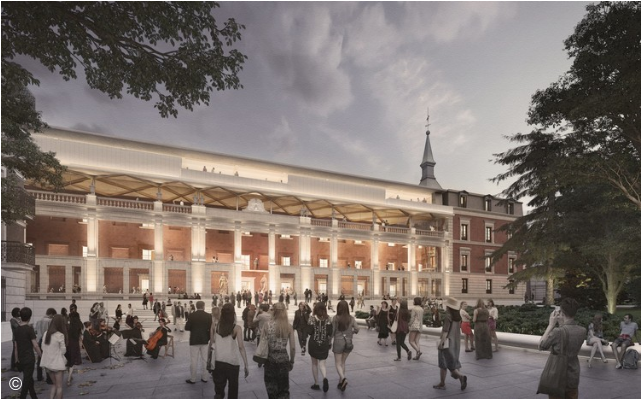 London-based Foster + Partners and Madrid-based Rubio Arquitectura won the international competition for the revitalization and refurbishment of the 17th century Hall of Realms (Salón de Reinos). The historic building will be part of the Museo del Prado campus in the Spanish capital.

The Salón de Reinos (also translated as Hall of the Kingdoms) or salón grande (great hall) is a wing of the Buen Retiro Palace in Madrid. Built between 1630 and 1635, it housed the largest paintings in the royal collection, now all in the Museo del Prado. It is named after its paintings of the coats of arms of the 24 kingdoms which formed the Kingdom of Spain at the time of Philip IV of Spain. It was also known as the Museo del Ejército, after the museum housed in it until 2010, when that museum’s collections were moved to the Alcázar of Toledo. The Salón de Reinos and the Casón del Buen Retiro are the only survivors of the original grand scheme of the palace.

Originally intended as a place from which the king could watch and assist in theatrical productions in the courtyard, the Salón de Reinos was turned into a throne room when it was decided to turn Buen Retiro into a full palace. It was still used for spectacles and soirees, so a balcony was added so that festivities could be viewed from above, but as a throne room it had to impress ambassadors and other distinguished members of the courts of Europe who visited the palace.

The Prado Museum has recently acquired the building which will house an extension of its collection by 2019.

The restoration and renovation project will cost €30 million and will “provide a large atrium to access the building’s south façade.” This “will lead to an exhibition space on the first story,” while also making the park and surrounding site more pedestrian friendly.