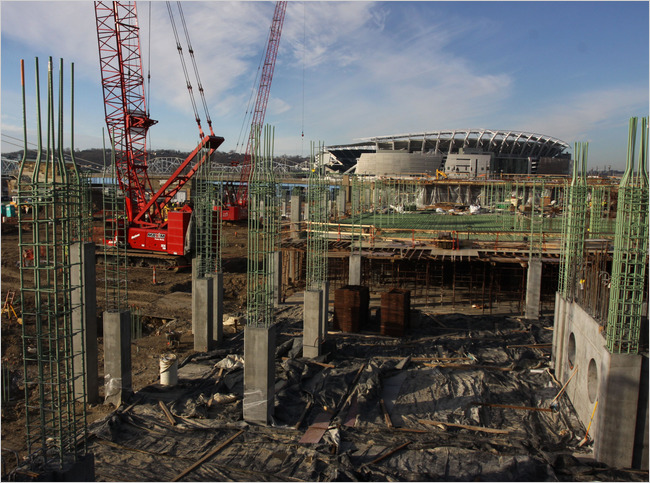 Years after a wave of construction brought publicly financed stadiums costing billions of dollars to cities across the country, taxpayers are once again being asked to reach into their pockets.

From New Jersey to Ohio to Arizona, the stadiums were sold as a key to redevelopment and as the only way to retain sports franchises.

But the deals that were used to persuade taxpayers to finance their construction have in many cases backfired, the result of overly optimistic revenue assumptions and the recession.

Nowhere is the problem more acute than in Cincinnati. In 1996, voters in Hamilton County approved an increase of half of one percent in the sales tax that promised to build and maintain stadiums for the Bengals and the Reds, pay Cincinnati’s public schools and give homeowners an annual property tax rebate. The stadiums were supposed to spur development of the city’s dilapidated riverfront.

But sales tax receipts have fallen so fast in the last year that the county is now scrambling to bridge a $14 million deficit in its sales tax fund. The public schools, which deferred taking their share for years, want their money.

This 2009 New York Times article documents the sad fact that too many cities do too little research before sinking large amounts of public funding into private sports stadiums.

While exceptions exist, the record shows that–as a revitalization tool–a sports stadium is a poor proposition.

But at least it’s expensive…