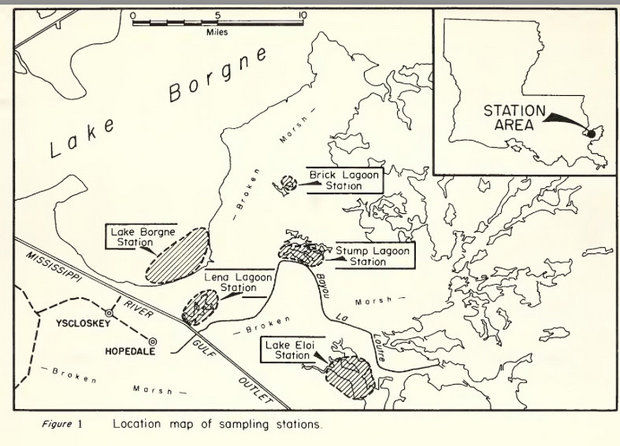 Note from Storm: Among the thousands of ecologically-disastrous U.S. Army Corps of Engineers projects that have destroyed America’s natural resources over the past two centuries, the Mississippi River-Gulf Outlet (MRGO) (pronounced “Mr. Go”) project was one of the more recent. It connected Lake Pontchartrain to the Gulf of Mexico.

It was also one of the stupidest projects, since studies from the 60’s clearly showed it would induce vast damage while providing almost no benefits to anyone. The project went ahead anyway, since the Corps budget is largely based on damming things that need to flow, and on connecting flows that shouldn’t be connected. Thus the thousands of unnecessary dams plaguing the nation’s rivers, which are now being removed at an ever-increasing rate to restore fish migrations and entire ecosystems.

After a long fight be conservationists and restoration ecologists, the MRGO canal was finally dammed in 2009. Now, some local folks who grew up and fished in the Lake Pontchartrain Basin during the decades of salt water intrusion are complaining that the invasive species they got used to catching are no longer there (as a result of it’s being restored to natural conditions). They want them back, and are calling for the dam to be removed. Hopefully, reason will prevail, and they won’t sacrifice their childrens’ future for the sake of their attachment to a dumb mistake.

From the article: A Louisiana Department of Wildlife and Fisheries study released in 1970 shows how profoundly the Mississippi River-Gulf Outlet impacted salinity levels in a significant portion of the Lake Pontchartrain Basin.

The report, titled, “A Study of Estuarine Sportfishes in the Biloxi Marsh Complex,” provides an insightful look at the metamorphosis of the wetland area east of Lake Borgne from July 1960 through June 1968. Construction of the MRGO was completed in 1965.

John Lopez, executive director of the Lake Pontchartrain Basin Foundation, said the damming of the MRGO is beginning to transform the area back to what it was before channel was ever dug.

But group of commercial and recreational fishers is pushing to remove a rock dam constructed across the MRGO in 2009. They feel the productivity of the Lake Pontchartrain Basin has declined since the dam has impeded flows of salty water into the system.