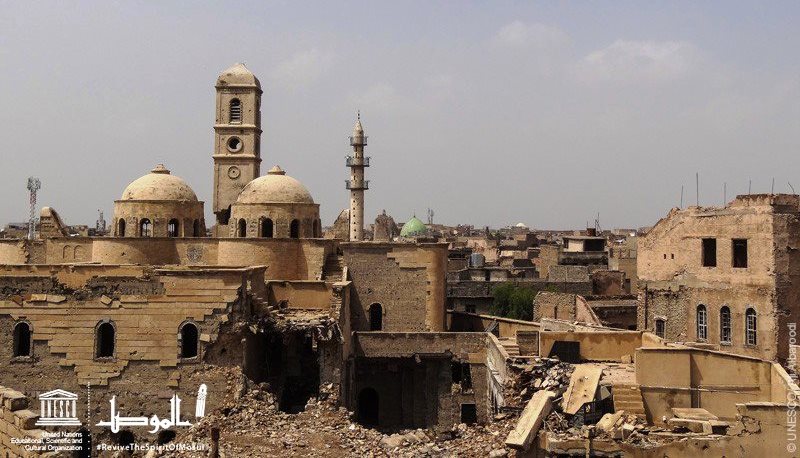 On September 11, 2019, UNESCO Director-General Audrey Azoulay held a working meeting at UNESCO Headquarters with the Minister of Culture of Iraq, Abdulameer Al-Dafar Hamdani, and the Governor of Nineveh Province, Mansour Al-Mareed.

The purpose was to review the progress of the project—Revive the Spirit of Mosul—and to announce that reconstruction would start in early 2020. This would include restoration of the famed Al-Nuri Mosque.

“We are committed to working together. We agreed on a solid timetable and action plan,” said the Director-General at the end of the meeting, referring specifically to the reconstruction project funded by the United Arab Emirates, which includes the Al-Nuri Mosque and its minaret as well as two churches. She indicated that consolidation work on the remaining structures and demining of the mosque and minaret site is expected to be completed in the coming weeks, and reconstruction could begin in the first half of 2020. The latter had been severely damaged during Daesh’s occupation of the city. “We are aware of the difficulties, but the people of Mosul deserve our efforts,” said Ms. Azoulay.

“Mosul was the symbol of diversity and tolerance before the conflict. The spirit of Mosul is an example and an objective for the rest of Iraq,” she added.

“The needs are considerable,” said Minister of Culture Al-Hamdani, “but with the help of UNESCO and the international community, we can meet the challenge. We will work as a united team.”

Nineveh Governor Al-Mareed thanked UNESCO for its efforts to revive Mosul’s history and spirit and emphasized the need let people know about the project. “The population must be informed that this is a concrete project,” he said.

The date of the meeting was ironic (probably purposely so), since it was the Cheney/Bush administration’s lies about Saddam Hussein’s involvement in the 9/11 attacks on the U.S. that resulted in their invasion of oil-rich Iraq (and the creation of ISIS) which—in turn—led to the destruction of the ancient city of Mosul. Over 5000 Americans lost their lives in the illegal invasion, tens of thousands of Americans were crippled or disfigured, and over 500,000 Iraqi civilians died as a result.