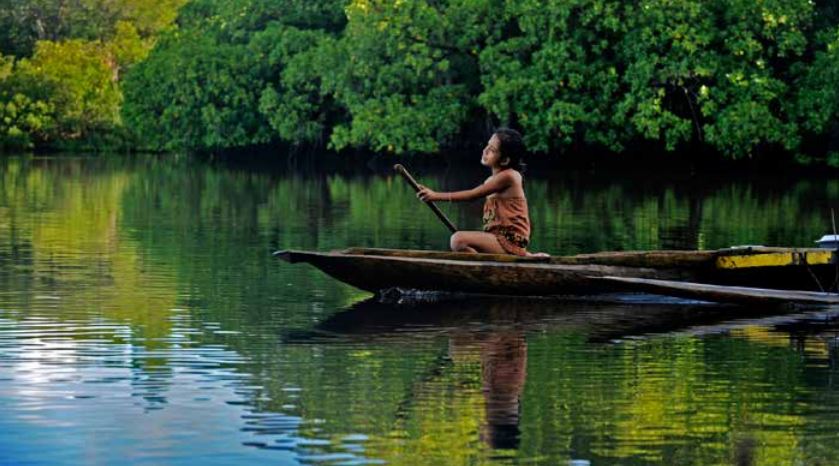 Over the past two decades alone, nearly 100,000 hectares, or 6% of the world’s mangrove forests have been lost. This is just a fraction of the global mangrove loss through the past century.

Restoration of these important forests is a tangible way forward – with the help of a new interactive map tool, the potential for restoring as much as 812,000 hectares of mangroves just may be possible.

Healthy mangroves are a precious, almost priceless, resource, and yet over the past 50 years the world has witnessed staggering levels of mangrove loss and degradation. Losing mangroves means losing lives and livelihoods, food security, valuable timber production, coastal defence and one of the most efficient and important carbon stores on the planet.

Recognising this enormous issue, experts at the University of Cambridge, The Nature Conservancy and IUCN merged innovative data to create a unique mapping tool to allow decision-makers to identify areas where mangrove forest restoration can succeed by highlighting places where they once thrived, and where conditions remain suitable for restoration.

For all of the areas that show promise, this new mapping tool can inspire hope that we may be able to restore mangrove forests in selected areas. The major factors influencing mangrove restoration which are incorporated into the tool include: tidal range; recent sea level rise; projected future sea level rise; recent changes in sediments; time since loss; average size of loss patches; and the proximity of loss areas to remaining mangroves.

Using these factors, the expert advisory group also developed a restoration potential score which gives an indication of the potential for restoration in different settings. More than that, the tool calculates what people can actually gain from restoration in a particular area.

As much as 812,000 hectares of lost or degraded mangrove areas show potential for restoration, with over half a million hectares of these considered highly restorable. These figures are truly global as the areas identified for restorable span 106 countries and territories.

Other areas are less likely candidates for successful mangrove restoration because of factors like profound erosion, or that they have subsided, become fully inundated by the sea, or are located in places that have been converted into buildings and grey infrastructure. These areas are excluded from the models of restoration potential.

The greatest potential for restoration is perhaps found within the approximately 138,000 hectares of identified degraded mangroves – where there it is believed that full recovery can be expected to bring further benefits with relatively little investment.

The potential to restore mangroves on coastlines, in deltas and wetlands, and along waterways across the world is there.

The Mangrove Restoration Potential Map is funded by the International Climate Initiative (IKI) of the Federal Ministry for the Environment, Nature Conservation and Nuclear Safety (BMU), Germany.