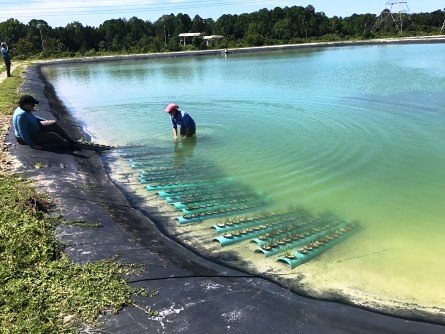 Every so often, Carrie Adams and Laura Reynolds take a boat onto Florida‘s Lake Apopka to toss plants into the water. They hope the plants take root in the lake and help stimulate the process that may eventually rid the water of pollutants and help boost the fish population. Other lakes in Florida and around the country can also benefit from their technique, the University of Florida Institute of Food and Agricultural Sciences researchers say.

The project by UF/IFAS researchers, the water management district and others will help Lake Apopka’s ecosystem. Lake Apopka “serves as a showcase, demonstrating that dedicated and concerted restoration can work remarkably well,” Dobberfuhl said.

The project involves far more than just throwing plants into the lake, though. Adams and Reynolds are taking techniques that work in theory and putting them to the test in a practical situation, said Reynolds, the lead investigator and a UF/IFAS assistant professor of soil and water sciences.

First things first, though. “We want to figure out a way get plants to survive in the murky, low-light conditions in Lake Apopka,” said Adams, a UF/IFAS associate professor of environmental horticulture. If they do, that will improve the lake’s health and preserve its bass population, the researchers said.

As part of their research project, they put plants in the lake three times in 2017, said Adams. They intend to plant every few months from 2018 to 2020.

The plants will help stabilize the lake’s sediment, keeping it on the bottom and out of the water. That allows sunlight to get reach deeper in the water, increasing photosynthesis rates and survival of young plants, Reynolds said. Plants also provide food and habitat for sport fish and other wildlife and help improve water clarity, according to this UF/IFAS Extension document.

Reynolds said their research technique can be used anywhere. “We are taking a research-driven idea for a restoration technique and testing that idea in the lab, in small plots in the field and in larger restoration plantings,” Reynolds said. “By doing this, we will get a better idea of which techniques have the most promise under specific environmental conditions — for example, low light.”

Reynolds and Adams will measure their success by plant survival and by how plant establishment changes the environment, whether that’s measured by improved water quality, sediment stabilization or fish use.

“We will know why it worked or didn’t work in a larger context, instead of merely knowing whether it worked in Lake Apopka,” Reynolds said “Therefore, this work and these findings will be useful to projects in other lakes or rivers attempting to increase submerged aquatic vegetation in sub-optimal conditions or projects that have a specific aim — for example, to increase a fishery.”

For now, the UF/IFAS researchers focus on Lake Apopka, which at 30,000-plus acres, ranks as the fifth largest in Florida. Lake Okeechobee, with 451,000 acres, is the biggest lake in the Sunshine State.

Reynolds and Adams work with other government organizations to restore Lake Apopka into an ecotourism destination. Their collaborators include the Florida Fish and Wildlife Conservation Commission, the St. Johns River Water Management District and Duke Energy to enhance Lake Apopka’s water quality.

Duke Energy provides space for experiments and donates eelgrass for the project. The scientists also use pondweed, Adams said.

The plants have different traits, Reynolds said. For example, plant leaf height and branching may be important as they are likely to influence how fish use the vegetation. For now, both species seem to be surviving, so that is promising, Adams said.

Adams and Reynolds have been working on the restoration project since April 2017. Their original contract gave them funding for some greenhouse projects to take a closer look at what might prevent plants from establishing in the lake and a planting of just over six acres of lake bottom, Adams said.

The UF/IFAS researchers were recently awarded a new contract through 2020, along with another UF/IFAS researcher, Charlie Martin. It will fund research that builds on the results from the past plantings. In each of three years, researchers will plant two acres of lake bottom. By integrating lessons learned from previous plantings, they expect success to increase with each iteration.

“Our research programs have contributed to these theoretical ideas in the primary literature, and with this project, we are using that theory to hopefully solve a real-world problem,” Reynolds said.