On September 28, 2021, a sustainable, live-work hub envisioned by a University of Chicago (UChicago) student design team was announced by the Department of Planning and Development (DPD) as the winner of an international student design contest to reimagine the future of McKinley Park’s sprawling Central Manufacturing District complex.

The “McKinley Mills” concept, created by eight UChicago urban design students as part of the C40 Students Reinventing Cities competition, would repurpose three City-owned buildings within the complex with a mix of uses that include light manufacturing, retail, housing, and institutional uses.

The proposal would also implement sustainable energy resources through a rooftop solar array and repurpose the Central Manufacturing District’s iconic clock tower as a museum with adjacent open space. 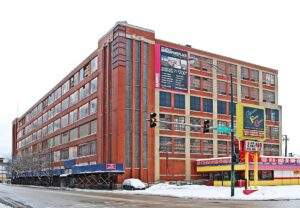 The Spiegel Administration Building in the Central Manufacturing District. Photo by Andrew Jameson via Wikipedia.

“As the climate crisis progresses, urban planners must play a critical role in both mitigation and adaptation,” said UChicago team member Justin Bologna, one of the eight UChicago students on the winning team. “Our project re-envisions a disused, formerly industrial site as a mixed-use, sustainable community, fine-tuned for both current residents and the future planet we want.”

Thirteen other competition submissions, including from schools in Australia, China, Italy, Portugal, Switzerland, and the United Kingdom, envisioned mixed-use facilities anchored by supportive uses, including an urban farm and a battery recycling facility; a business and cultural center; and improvements that aim for net-zero carbon emissions and more pedestrian-friendly transportation resources.

“This academic exercise provides a real-world look at what’s possible with one of the largest ensembles of vacant and underutilized buildings in the United States,” DPD Commissioner Maurice Cox said. “The concepts are visionary, actionable and forward-thinking. I encourage developers across the world to consider these ideas for what is arguably Chicago’s largest adaptive reuse opportunity.”

Developed in the early 1900s on the 1700 to 2400 block of West Pershing Road, the Central Manufacturing District is often cited as the world’s first industrial park.

C40 Students Reinventing Cities provides a unique opportunity for academics and students to collaborate with global cities on how neighborhoods are planned and designed.