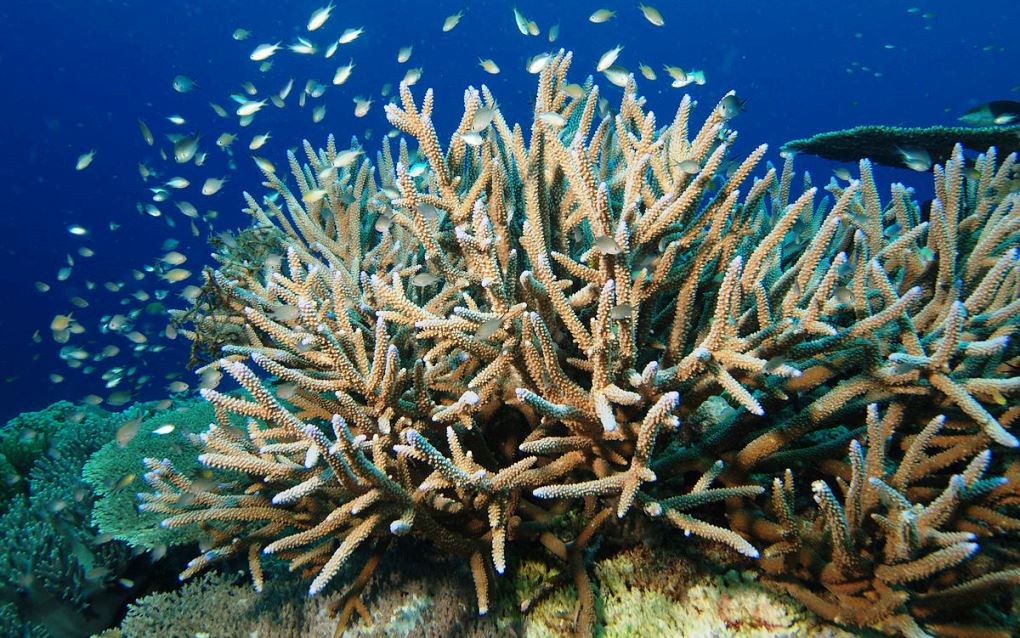 Researchers knew they had a technological gem at their disposal when, four years ago, the University of Miami unveiled a wind-wave tank capable of generating Category 5 hurricane-force conditions with the flip of a switch. So they quickly took advantage, running experiments that examined everything from how wind interacts with spray coming off the surface of seawater to how buoys simulating spilled oil would be affected by Gulf currents.

But the experiment that got underway June 1, 2018 was unlike any ever conducted inside the 75-foot-long tank. Submerged below the water was a planting of staghorn corals. One of the questions researchers hoped to answer: To what extent can coral reefs dissipate the energy of shore-bound waves created by storms?

“Just think of coral reefs as underwater structures or sea walls,” said Andrew Baker, a coral reef biologist at UM’s Rosenstiel School of Marine and Atmospheric Science, where, on the first day of the 2018 Atlantic hurricane season, University scientists gave the media a first-look at their Engineering Coastal Resilience Through Reef Restoration project. “Anything that causes shallow water offshore makes waves break early before they get to shore, dissipating all of their energy.”

Coral reefs and other coastal ecosystems like seagrass beds, mangrove forests, and sand dunes have long been touted for their potential to help reduce the impacts of rising sea levels and storm surge. But their benefits have never been well quantified, noted Brian Haus, professor of ocean sciences and director of the Rosenstiel School’s Alfred C. Glassell, Jr. Surge-Structure-Atmosphere Interaction, or SUSTAIN, tank.

“The question has always been how to access the value of reef systems, and from a design perspective, if you’re trying to restore reefs, how do you do it in a way that provides optimal benefits,” Haus said.

So Haus and his team will subject 30 to 40 coral structures to 12 different wave parameters. Waves generated inside the tank on Friday were fairly tame—nothing close to hurricane- or even tropical storm-force winds. But in the coming days Haus and his team will ramp up conditions inside the tank, adding higher water levels and turning up the 1,400-horsepower fan to generate faster currents.

Acoustic sensors and wire gauges will record a multitude of measurements, giving researchers the data they need to determine just how much coral reefs can mitigate the intensity of waves of varying velocity.

One study, according to Rosenstiel School research associate Jane Carrick, reported that a healthy coral reef can mitigate as much as 97 percent of a wave’s energy. “And that’s why corals are important,” she said.

Working with Diego Lirman, associate professor of marine biology and ecology, Carrick collected many of the corals being used in the coastal resilience study, gathering only specimens that were either diseased or unable to be nursed back to health. “We’re using staghorn corals because they’re much better for wave mitigation,” she said.

In the next phase of the experiment, they will plant corals off the coast of Miami Beach. Team member Landolf Rhode-Barbarigos, an assistant professor of civil engineering, will apply results from the study to coastal structures. “For example, a reduction of a certain percentage of wave velocity could increase the longevity of sea walls,” he said.

The study couldn’t come at a better time. Miami Beach is spending $500 million to raise more than 100 miles of roads, install dozens of pumps, build higher sea walls, and revamp drainage systems as part of a project to combat sea-level rise. “Green infrastructure provided by coastal ecosystems like healthy coral reefs, mangroves, and seagrasses can mitigate the impacts of climatic hazards in a more efficient and cost-effective manner,” Lirman said.

This article by Robert C. Jones Jr. originally appeared on the University of Miami website. Reprinted with permission.

Photo of staghorn coral by Albert Kok via Wikipedia.