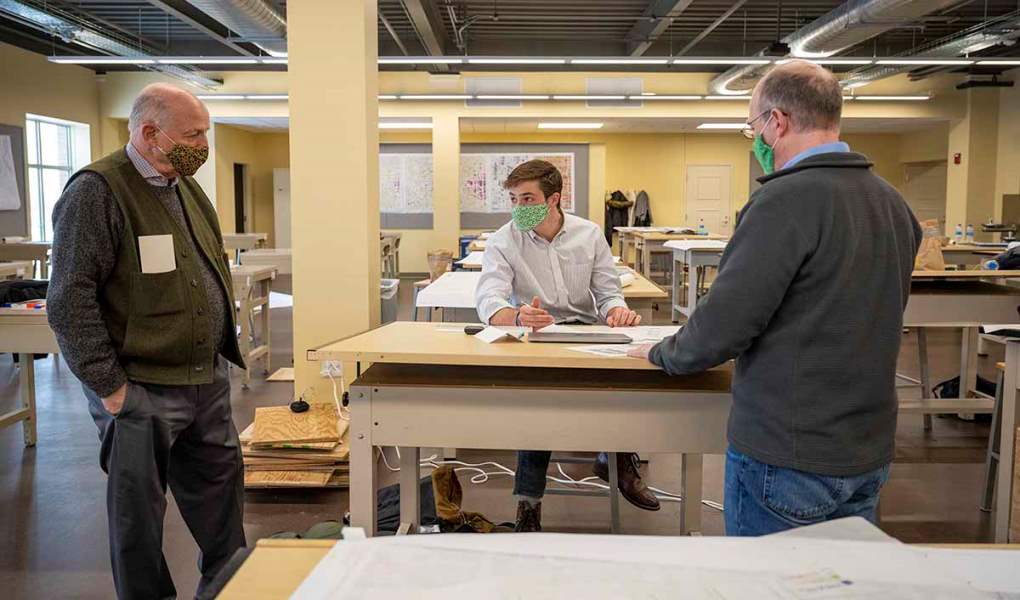 As originally predicted in The Restoration Economy, the 2002 book that’s required reading in hundreds of planning, architecture, economics and environmental courses in universities worldwide, schools are increasingly preparing their students for a world in which economic growth is primarily based on redeveloping and revitalizing the cities we’ve already built, and on restoring the natural resources we’ve damaged and depleted.

Now, in South Bend, Indiana, faculty and students at the University of Notre Dame School of Architecture are getting directly involved in community revitalization, attempting to undo the damage done by urban planners around the time of World War II.

William Street was primarily residential until about 1940, when the city decided to extend it north to Portage Avenue.

Designed to establish a new commuter corridor linking downtown to the far north side, the decision would have lasting consequences. Almost immediately, traffic increased, altering the historical character of the street and hastening its decline.

Homes became apartments or businesses and then parking lots, as people abandoned the area for the suburbs. Property values plummeted, until urban renewal drove the final nail into the coffin. 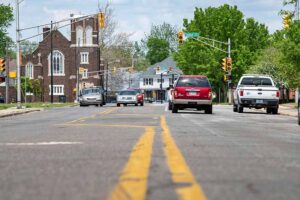 Today, the formerly quiet, tree-lined street is a sterile corridor of vacant land and parking lots, of narrow sidewalks and substandard commercial buildings. A liminal space dividing downtown from the near west side. Devoid of charm and character.

For developers and investors, this presents a challenge in the form of an “appraisal gap” — a negative relationship between the cost of a newly constructed home or building and its ultimate value. Currently, absent tax incentives or other public support, the return on investment in the area is negative.

“The primary deficit of this part of the city is the absence of a coherent, friendly and generally attractive public realm. Because the streets are devoid of streetscapes, and the carriageways are very wide, encouraging drivers to speed, it is impossible for a visitor to say ‘This is a civilized place,’” said Stefanos Polyzoides, the newly appointed Francis and Kathleen Rooney Dean of the University of Notre Dame School of Architecture.

Tim Corcoran, director of planning and community resources for the city of South Bend, described it as “the middle of nowhere,” a “no man’s land,” blaming a confluence of historical factors as well as poor or no planning on the part of the city.

“The street changes to the detriment of the residential nature of the place; that leads to the neighborhood not wanting to be residential in nature any longer. Thus demolition starts to happen and it starts to convert to a quasi-business area. So you have decades of change, but with little thought about what it should look like and how it integrates downtown to the near west neighborhood,” Corcoran said. 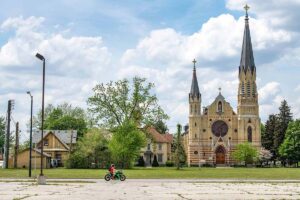 But a plan is afoot to reverse the mistakes of the past, close the appraisal gap and lure new investment to the area. And not just large investment, but small investment, so that people with a history in the area can contribute to its growth as well — for example, by purchasing and redeveloping the vacant lot next door or rehabbing the home down the street.

In collaboration with the city and other campus and community partners and stakeholders, students and faculty with the School of Architecture spent a week in January reimagining the section of William from Lincoln Way West to Western Avenue downtown based on new urbanist principles of planning and design that create human-scale, walkable, functional and sustainable urban communities.

The result: the outlines of a plan for rejoining downtown, with its dense mix of high-rise buildings and apartments, parks, restaurants and cultural venues, to the near west side, with its museums, community organizations and historic homes and buildings, along a mended William Street.

The exercise was part of a new tradition within the School of Architecture: the Dean’s Charrette — an attempt by Polyzoides to redirect the school’s focus on classical architecture and urbanism outward, into the wider world, and thus engage students in “learning by doing.”

“We’re starting a new journey,” said Polyzoides, co-founder of the Congress for the New Urbanism and a partner in Moule and Polyzoides Architects and Urbanists, an award-winning global design and planning firm based in Pasadena, California. “We’re trying to expand our presence in the city and world through teaching by learning in place.”

From the French for “cart,” as in one used for transporting the work of architecture students at the École des Beaux-Arts in 19th-century France, a charrette is an intense period of design or planning activity aimed at solving a particular problem with input from all stakeholders.

In this case, in addition to students and faculty from the School of Architecture, that included new urbanist consultants in landscape architecture, mobility, economics and civil engineering, and leaders and stakeholders from the city of South Bend, the new west neighborhood, the local development, business and architectural communities and the campus community, among others.

The city has committed to a second Dean’s Charrette.

Moving forward, the plan is for two School of Architecture charrettes annually, one each at the start of the fall and spring semesters.

“I’ve participated in about 50 charrettes, so I know how valuable they can be from the perspective of getting a lot of work done in a short amount of time,” said Corcoran, who shares views regarding the importance of classical and vernacular architecture within traditional urbanism. “So for the student who will probably be working for a firm that uses this type intense workshop to generate ideas, it’s a great thing for them to learn.”

The city has been eyeing William for redevelopment for some time. It returned the street to its original two-way orientation under then-Mayor Pete Buttigieg in 2014, and it controls significant property at the south end of the street, around Four Winds Field, the city’s minor league baseball stadium. The area is part of a special taxing district for redevelopment projects that includes downtown and the near west side.

“So there are a lot of opportunities to look at a whole variety of planning, urban design and architectural issues there,” Corcoran said.

In preparation for the charrette, the students and faculty surveyed the 10-block study area, documenting an existing network of streets and blocks well-suited to redevelopment, as well as a number of noteworthy buildings, such as the First Presbyterian Church and the former Central High School. At the same time, they documented a lack of well-defined public spaces, a glut of vacant property and a “shocking” number of parking spaces — more than 2,200 between the streets and surface parking lots.

Featured photo shows Stefanos Polyzoides (left) discussing projects with students and faculty in the studio at Walsh Family Hall. All photos courtesy of University of Notre Dame School of Architecture.