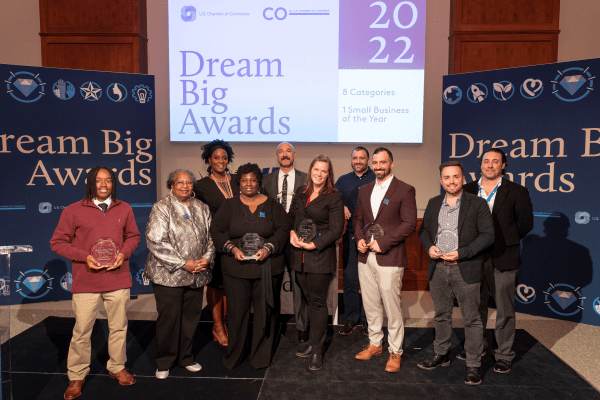 On October 19, 2022, the U.S. Chamber of Commerce—traditionally one of the most rabidly anti-environmental organizations in the United States—awarded a $25,000 cash prize to Carbon Rivers, an environmental start-up that is helping to revitalize the local economy in Knoxville, Tennessee.

Carbon Rivers was selected as the 2022 Dream Big Small Business of the Year, an award presented by Spectrum Reach, with support from MetLife and Dell.

In 2017, Carbon Rivers’ team of engineers—all University of Tennessee alums—began developing advanced materials technologies in the basement of a house.

In the last year, they brought two pioneering initiatives to the commercial market:  a material that reduces waste by increasing the durability of tires and boat coatings, and an upcycling process that recovers glass to be used in wind turbines.

With an emphasis on community involvement, Carbon Rivers has been sharing their advanced tech solutions with the public and private sectors, local youth, and emerging STEM students—making Knoxville a region of tremendous opportunity in manufacturing and engineering.

They attribute their success to being able to think and operate with freedom and imagination for how to solve industry problems.

The Dream Big Small Business of the Year Award recognizes a small business that is making a meaningful contribution to the economy and job creation, and embodies the spirit of innovation, entrepreneurship, and individual initiative.

Carbon Rivers was named the winner out of nearly 3,000 applications for receiving the top score after several rounds of judging.

“Our nation’s entrepreneurs continue to demonstrate resiliency, ingenuity, and creativity against all odds. Now, more than ever, it is important to recognize them for their inspirational achievements and contributions to their communities and our nation’s economy,” said Tom Sullivan, U.S. Chamber of Commerce vice president of small business policy.

“This year’s Dream Big Award winners represent the best of American small business. Congratulations to Carbon Rivers and all of this year’s winners and finalists,” he added.

Carbon Rivers was one of 27 finalists selected by a panel of judges for eight Dream Big Small Business Achievement Awards.

“Our country was built on the success of small businesses; they are the backbone of our economy and the heart of our communities,” said Michael Guth, Senior Vice President, Marketing, Spectrum Reach.

“We are honored to partner with the U.S. Chamber of Commerce in recognizing Carbon Rivers and all the finalists for their outstanding innovations and achievements, and for sharing in our commitment to invest in the growth and economic success of our communities,” he continued.

“Over the past few years, small businesses have faced unprecedented challenges, but they have persevered, using their grit and determination,” said Cynthia Smith, senior vice president, Regional Business at MetLife.

“Cha Community represents the best of these qualities, and we congratulate them on their Minority-Owned Business Achievement Award,” she continued.

“Dell is committed to empowering small business owners and entrepreneurs because we understand their potential to impact the world,” said Megan Wright, Small Business Associations Lead at Dell.

“We are thrilled to partner with the U.S. Chamber of Commerce to further fuel the amazing aspirations of small businesses who are vital to their communities and the country’s fiscal growth. We strive to serve as a critical resource to promote progress and innovation amongst businesses,” she concluded.