On April 26, 2017, University of California at Santa Barbara (UCSB) and U.S. Fish and Wildlife representatives gathered in Goleta, California to mark a major step toward restoring a former golf course back to its ecological glory. The groundbreaking ceremony at the former Ocean Meadows Golf Course started the process of removing soil used to fill the site 50 years ago. 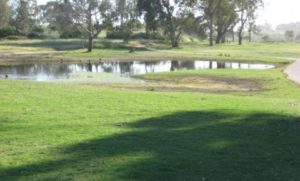 Besides being a wonderful project that took years of hard work just to get to this point, this repurposing of a golf course into a far-more-valuable public asset is a model for the world, which is plagued by tens of thousands of highly-toxic, water-wasting golf courses that–for the most part–serve only society’s elite.

The greatly-enhanced ecosystem services and public recreation–not to mention important insights from related restoration ecology research–far outstrip the commercial contributions of even a viable golf course, much less a defunct one such as this.

The new name of this property in Goleta is the North Campus Open Space (NCOS). Its new purpose is to provide the public with trails and bridges across the coastal habitat and restored wetlands on the upper Devereux Slough. 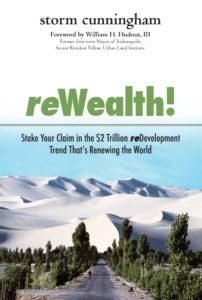 [Note from Storm: In my 2008 book from McGraw-Hill, Rewealth, I discussed how the world’s vast inventory of golf courses serves to reserve urban green space that can later be transformed into public parks. This is especially valuable in cities whose planners weren’t smart enough to create sufficient park space. The repurposing of this dead 136-acre golf course could thus become a model for cities worldwide.]

This project is intended to provide residents of the city of Goleta with access to an expanse of coastal open space that extends 2.25 miles along the Ellwood-Devereux coast.

The site will ultimately feature natural open space, trails, and boardwalks for public access and passive recreation. It will also be used for teaching, research, and community outreach. Restoration and preservation of wetlands and other habitat along Devereux Creek will also be a primary focus for the property. UCSB’s Cheadle Center for Biodiversity and Ecological Restoration (CCBER) has been involved in preliminary research that will be used in the preparation of a restoration plan for the property.

With its characteristically large pectoral fins, big pouty mouth, and near-translucent appearance, the tidewater goby is a distinctive fish. Topping out at two inches in length, the California-specific species has been known to frequent several spots in Santa Barbara County. At least, it had. The goby has been on the endangered species list since 1994.

But the diminutive fish may soon see new habitats created on its behalf, courtesy of a unique partnership between UC Santa Barbara and The Trust for Public Land (TPL).

Aiming to restore and preserve the wetlands on the upper Devereux Slough –– which 50 years ago was filled with topsoil to make way for a golf course –– the pair is teaming to return Ocean Meadows Golf Course to its natural state. The project will ultimately open to the public an expanse of land extending some three miles along the Ellwood Devereux coast in Goleta by connecting several existing preserved properties.

A national leader in raising money for conservation, the nonprofit Trust for Public Land (TPL) purchased 63 acres of the now-closed Goleta course with $7 million in grant money. Subsequently gifting the property to UCSB, which will serve as long-term stewards of the land, TPL will also help raise funds for its restoration. 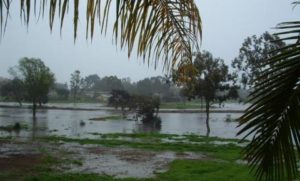 UCSB and the UC Regents now own the former Ocean Meadows property and are working collaboratively with TPL and a number of local, state, and federal partners to design and implement the restoration of this former estuary system. Upcoming public meetings will focus on the ecological goals of the restoration project and their integration with the public access components. Funding was raised from a diversity of sources.

“This is an opportunity for the campus –– a chance to finish something that was started back with the Ellwood-Devereux project –– and I’m real pleased about the whole thing,” Duncan Mellichamp, an emeritus professor of engineering at UCSB, said. “The project will ultimately benefit the community probably more so than the campus, because it will open up access to the public. It makes all the sense in the world to do. And it sure fits the university’s triple mission of education, research, and public service.” 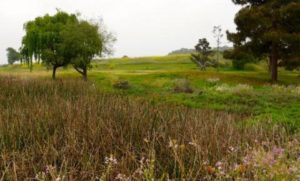 All three of those priorities will be pursued at Ocean Meadows. Among the groups so engaged will be UCSB’s Cheadle Center for Biodiversity and Ecological Restoration (CCBER). Besides helping to develop an overall restoration plan –– and providing expert guidance in such things as local plants, soil types, and habitat creation –– CCBER will use the site for investigation, teaching, and community outreach.

“I see a huge range of outcomes in terms of research,” said Carla D’Antonio, CCBER’s faculty director. “If the sea level rises a meter in the next century, what does this mean in terms of the absorptive capacity of wetlands now that we’ll have an extension to the Devereux Slough? The area already floods. How will that change? How will birds and animals respond to the changes that we put on the landscape? These are issues that will take a long time to bear out empirically,” she added, “but we can do a lot of modeling and projections and student-based projects that could give insight into those questions.”

The culmination of an endeavor it first began in 2008, TPL completed purchase of the Upper Devereux Slough property on March 29, 2013. The donation and title transfer to UCSB officially closed on April 30, 2013.

“This property is now part of a 650-acre complex of contiguous protected lands and is permanently protected for use by both people and wildlife,” said Alex Size, project manager for TPL. “The Trust for Public Land wants to thank our partners –– the California State Coastal Conservancy and UCSB’s Cheadle Center for Biodiversity and Ecological Restoration –– as well as our funders and the many supporters that helped along the way to make this acquisition possible.”

Cheering the completion of the deal, Size cited the “years of hard work, including fundraising and navigating a circuitous regulatory process” that have “finally paid off for the public.” Rough estimates peg the cost of restoring the property at around $10 million, according to Chuck Haines, director of capital development in UCSB’s budget office. The intent, he said, is to solicit enough grant funds and private donations to cover the total price tag, plus support long-term operation and maintenance.

“The purpose is to restore the site to its historic condition and preserve the site in perpetuity, to protect species –– both wildlife and plant life –– and to allow for public access and passive recreation,” said Haines. “No construction. No activities other than those related to restoration. Everyone involved is in lockstep with those requirements. 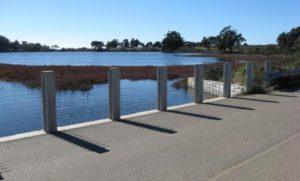 Such projects could include technical, hydrological, engineering, and biological inquiries, said D’Antonio, including “plant responses, fish responses and the potential for creation of habitats for the endangered tidewater goby.”

“It’s exciting, but it’s going to be slow and careful and carefully done, because this is really a tremendous opportunity that will also improve the quality of the nearby Coal Oil Point Reserve, and the habitat value for animals and plants,” D’Antonio said. “This restoration project is really sealing the deal in terms of that eastern edge of the whole Ellwood-Devereux open space region. Taking away the golf course and putting the wetland back really helps homogenize the nature of that area as an intact habitat, instead of having all these interruptions. All the way across Ellwood Mesa to Storke Road will be restored habitat –– it’s wonderful.”