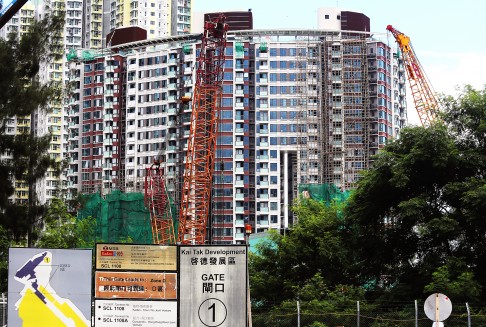 More than 300 Hong Kong flats will be sold at 80 per cent of market price in the Urban Renewal Authority’s first subsidised housing project to target middle-income families who cannot afford private housing but are considered too well-off for the Housing Authority’s Home Ownership Scheme.

The 338 apartments at the De Novo development in Kai Tak – which had been intended as an alternative to cash payouts for owners of property taken over by the URA – were converted into subsidised homes for sale after Chief Executive Leung Chun-ying asked for help from statutory bodies in offering cheaper flats in his January policy address.

The scheme aims to help young couples and families buy their first flat.

Besides the 338 subsidised flats, eight units have been reserved for the URA’s “flat-for-flat” scheme, which provides domestic owner-occupiers affected by redevelopment projects with an alternative option to cash. The remainder have been held to resettle residents affected by other URA projects.

The total cost to build the project was HK$2.4 billion. Lam said selling the flats at a 20 per cent discount would just about cover costs.