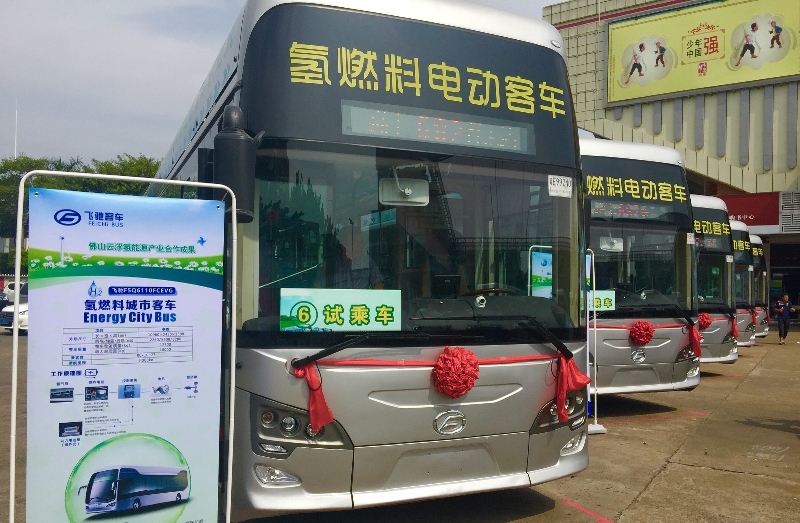 From the assembly line to real world revenue generating deployments, Ballard is forging ahead with buses in China. On September 29, 2016, commissioning and deployment commenced in the District of Sanshui, in the City of Foshan, in the Province of Guangdong, China.

On October 18, 2016 a second tranche of 10 fuel cell-powered buses were commissioned and deployed in the City of Yunfu, in the Province of Guangdong, China.

These recent inroads by Ballard Power Systems Inc., based in Burnaby, British Columbia, Canada, and other green-tech players in the Asian market underscores China’s efforts to make its cities more sustainable as they grow even larger.

Ballard says they have “zero tailpipe emissions” and low fuel consumption of 6.5 kilograms of hydrogen per 100 kilometres.

“Together, these are the largest deployments of zero-emission fuel cell buses in China’s history, but represent just the beginning of market adoption,” said Randy MacEwan, Ballard’s CEO. He said Ballard is positioned for more growth in China’s “dynamic” sustainable urban-transport sector.

Part of the reason, Asia experts say, is that China is planning an intensive urbanization drive — increasing the urban population in the country from 55 per cent last year to 60 per cent by 2020. Without including sustainable measures, creating such large “super urban clusters” would be impossible.

See full article by Chuck Chiang in the Vancouver Sun.