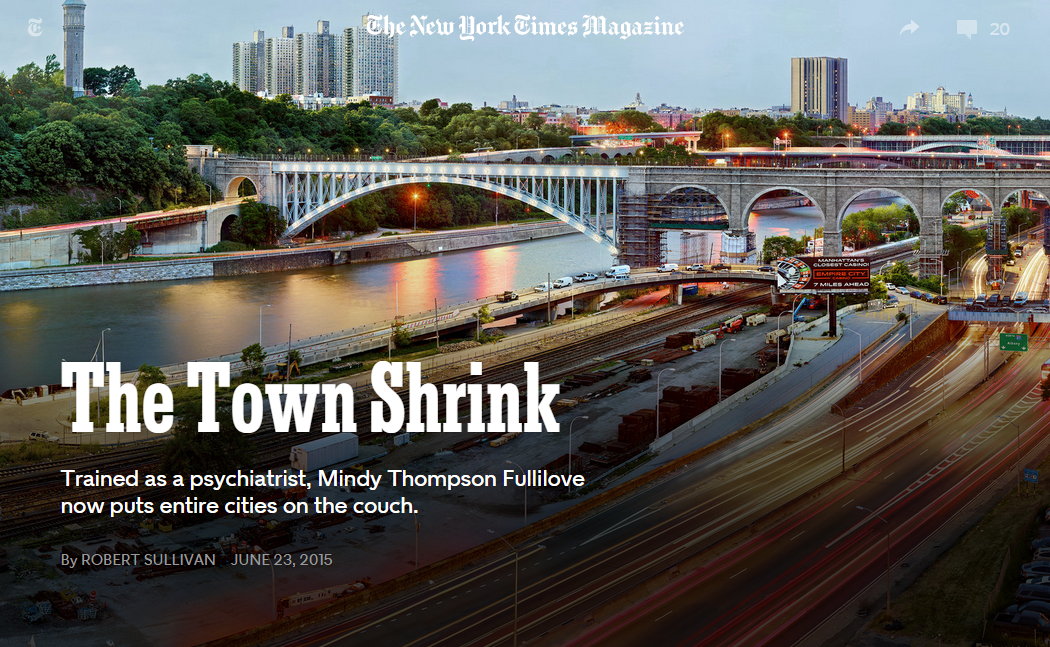 In June, the New York City Parks Department reopened the historic, long-closed High Bridge (built in the 1840s) to pedestrians, not just resuming the flow of foot traffic but also connecting it to a more recent innovation in public health, called the Giraffe Path, which was spearheaded by Mindy Thompson Fullilove, a research psychiatrist at the New York State Psychiatric Institute.

Fullilove has spent the past 30 years investigating how broken connections between various parts of cities harm public health and, more recently, exploring ways to reconnect them.

This year, after more than a decade of community meetings with the Parks Department, local college students who started hiking the Giraffe Path when they were kids at last saw their route extended, as the gates on High Bridge were opened, a victory for the city’s entire circulatory system. “People have a pretty easy time accepting the analogy between the body and the city,” Fullilove says.

Indeed, when considering the health of the city as a whole, metaphor and reality neatly align. Rule No. 1 for long life: Stay active, keep the blood flowing. Rule No. 1 for urban planning: Never close an artery.

The idea of a psychiatrist’s treating an entire city emerges from straightforward questions about how people interact with extreme environments. Nonetheless, psychology of place remained a radical notion even into the 1990s, when Fullilove was working as a specialist on the mental health problems associated with H.I.V. and AIDS.

“The idea that the location was important — people were just looking at me aghast,” she recalls. But as she continued her work through the ’90s, researching community trauma in Pittsburgh and New York, Fullilove increasingly came to see cities as ecosystems, with streams and channels, one flowing unseen into the next, disruptions wreaking havoc, threatening vitality everywhere.

In a 1999 article in The International Journal of Mental Health, she showed federal urban renewal policies to be a fundamental cause of disease.