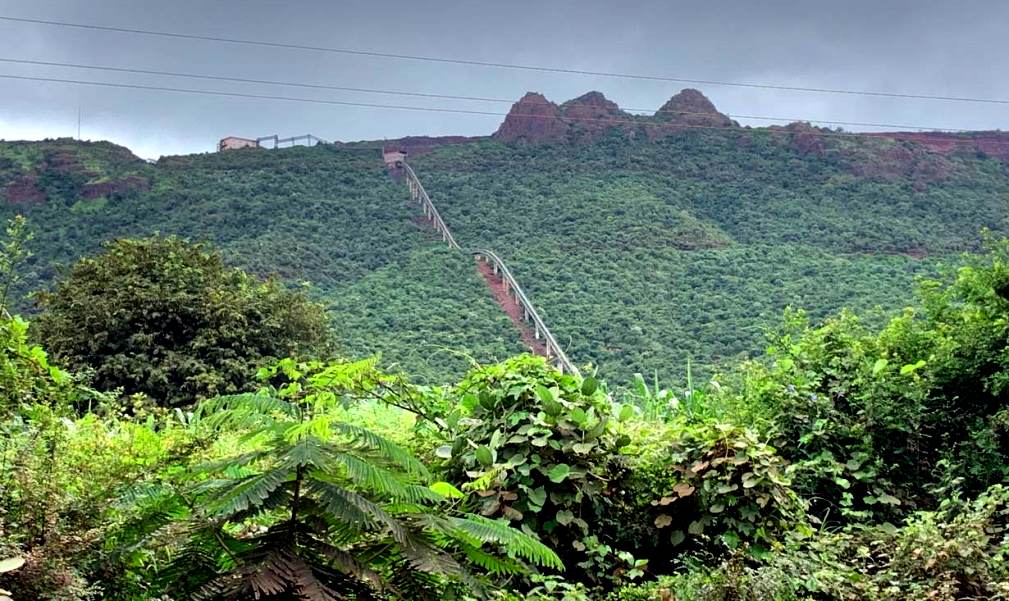 For years, Indian farmer Chape Hanumaiya struggled to grow anything on his tiny plot of land – it was caked in the thick, red dust drifting from the iron ore mines that surrounded it. 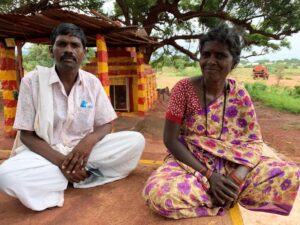 Chape Hanumaiya and his wife Ningamma pose for a picture in Papinayakanahalli in Sandur, India, September 6, 2021. Anuradha Nagaraj/Thomson Reuters Foundation.

But today, Hanumaiya and his wife are about to harvest pearl millet and sesame crops thanks to a pilot project that seeks to fight migration and boost food security around the southern city of Hosapete, the heart of India’s iron ore industry.

“My father grew millet and cotton on this land decades ago,” said Hanumaiya, 46, sitting in the shade of a tree near his one-acre (0.4-hectare) smallholding.

“Then the mining grew and over the years, when we came to the field, our clothes, the grains and everything would be covered with mine dust. We slowly gave up farming,” he added.

India is the world’s fourth-biggest producer of iron ore, the key ingredient in steel-making, and demand for the commodity is expected to grow as the global construction sector rebounds from COVID-19.

That could prompt a surge in output, putting additional strain on local farmers and fueling environmental damage in mining areas.

More than 6,000 hectares (about 15,000 acres) of land, both private and community-owned, have been blighted by iron ore mining in India, affecting nearly 30,000 people, according to data research agency Land Conflict Watch.

Hanumaiya’s land was revived under a sustainable co-operative agriculture scheme led by the Sakhi Trust nonprofit, which works with communities affected by mining in the area and encourages organic farming.

So far, it has helped bring more than 200 hectares of barren farmland back into production – creating a safety net and shielding local people from the ups and downs of mining.

“When the mines closed and agriculture failed, it forced people to migrate,” said Nagesh R. Sannaveer, a coordinator at Sakhi Trust.

“People were looking for food security and we started helping them get back to farming – from getting plots ready to cultivate to organising collective farming for the landless,” he added.

The mineral-rich, red earth in the twin districts of Ballari and Vijayanagara – where Hanumaiya lives – has been mined since colonial times.

But a decade ago, the Supreme Court banned mining in the region in an effort to stem illegal mines.

Many pits closed – including those near Hanumaiya’s plot, though villagers said activity was slowly picking up again.

Conveyor belts ferrying ore from the pits to factories cut across the hills and long lines of trucks snake in and out of the mines.

Like hundreds of other farmers from his district, Hanumaiya went to work in the iron ore mines when business was booming.

Many found jobs as loaders, drivers or machine operators, leasing their fields to mining companies to build factories, dump debris or for use as storage yards.

But when the Supreme Court ruling led to a massive slump in activity, some found their degraded land could no longer support their food needs, forcing them to join the ranks of India’s migrant labour force.

“Mining was booming – both legally and illegally, and it swallowed up fertile land,” said M. Bhagyalakshmi, founder of Sakhi Trust.

“People had no choice but to join the workforce at these mines. But when the illegal mines were suddenly closed following court orders, it left thousands jobless. It triggered a livelihood crisis that still haunts many families,” she continued.

Bringing contaminated agricultural land back into production is a slow process, said G. V. Ramanjaneyulu, executive director of the Centre for Sustainable Agriculture, a research organization.

Only farms that lie a certain distance away from active mines and have access to irrigation are eligible for the land revival project, which gives technical support to farmers as they embark on restoration work.

When the couple were tilling their land and waiting for their efforts to yield results, Ningamma took jobs on construction sites or as a farm labourer to put food on the table.

“Now we’re able to grow our own food and I know my children will not sleep hungry,” she said.

“All our children are studying and I want them to get proper salaried jobs. We don’t want them to go the mines, which took more than they gave us,“, she concluded.

It took Hanumaiya and his wife, Ningamma, two years to regenerate their field, where food crops now thrive a stone’s throw from the railway lines that carry iron ore across India.

Featured photo (by Anuradha Nagaraj/Thomson Reuters Foundation) shows a conveyor belt carrying iron ore from the mines to factories cuts across the hills near Lakshmipura village in Sandur, India.

This article by Anuradha Nagaraj (edited by Helen Popper) originally appeared on the website of the Thomson Reuters Foundation, the charitable arm of Thomson Reuters. Reprinted here (with minor edits) by permission.