The University of Virginia has signed a five-year memorandum of understanding with the New Delhi water authority to map out an expansive, multidisciplinary prescription to rehabilitate the pollution-choked Yamuna River.

The Yamuna River, which flows through New Delhi, is what environmental experts call a “dead river,” its oxygen-carrying capacity suffocated by gallons and gallons of sewage being pumped into the waterway 24 hours a day. 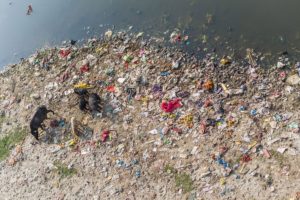 When asked what he wanted to focus on during his professorship, Pankaj Vir Gupta—the Harry S. Shure Visiting Professor of Architecture at UVA, a 1993 graduate of the Architecture School, and principal of New Delhi-based Vir Mueller Architects—didn’t hesitate. To him, the neglect of the Yamuna River presented a unique opportunity to create a research focus and launching pad for a long-term relationship between UVA and India.

He found a perfect project partner in Iñaki Alday, Quesada Professor and chair of UVA’s Department of Architecture. Alday is from Barcelona, Spain, and saw firsthand how his hometown went through a similar exercise, reuniting its metropolis with the Mediterranean Sea ahead of hosting the 1992 Summer Olympic Games.

More than 60 students from architecture, landscape architecture, planning, environmental sciences and engineering have sifted through data and drawn plans to revitalize the Yamuna area since the project launched in 2013. Aaron Bridgers, who earned his master’s degree in architecture in May, went to India in July of 2015.

He visited an area called Pragati Maidan, a large exhibition center adjacent to the river that has been largely neglected and unused. “We were looking at the site to see how it might be a link to the Yamuna,” Bridgers said.

Both of the following articles are by Jane Kelly, University of Virginia News Associate