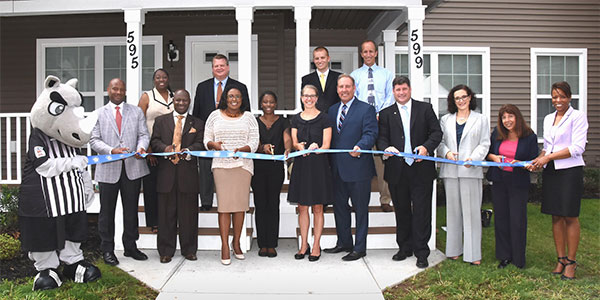 “The creation of affordable housing is key to revitalizing Upstate communities and injecting new vitality into neighborhoods that lead to stronger local economies,” Governor Cuomo said. “Stadium Estates is the latest example of these efforts and this administration will continue to support projects like this to help ensure that every New Yorker has a safe, decent and affordable place to call home.”

The three, four, and five-bedroom apartments are within 28 buildings constructed on formerly vacant lots. The mix of single family houses, duplexes, and triplexes serve low-income households with rents ranging from $600 to $785. All of the homes have Energy Star central air conditioning, washer/dryer hookups, outdoor sitting areas, and cable/internet hookups.

Stadium Estates helps JOSANA build on its existing resources to create a stronger neighborhood. Its close proximity to Downtown Rochester and an active neighborhood association are valuable assets to the 165-acre JOSANA community. Several of the project’s units are directly across from Rochester Rhinos Stadium and it was recently named a finalist by The Community Design Center Rochester for the 2016 Robert Macon Award for Urban Innovation.

New York State Homes and Community Renewal Commissioner James S. Rubin said, “Instead of vacant lots and abandoned houses, the JOSANA neighborhood is now a place where residents can find good, affordable, and attractive homes. Governor Cuomo knows that access to affordable housing makes a difference in the fabric of communities. Stadium Estates will complement other investments in Rochester and throughout the Finger Lakes that are growing strong local economies and improving quality of life.”

This project’s completion accelerates “Finger Lakes Forward,” the region’s blueprint to generate robust economic growth and community development. The State has already invested more than $3.4 billion in the region since 2012 to support its plan – investing in key industries including photonics, agriculture and food production, and advanced manufacturing. Today, unemployment is down to the lowest levels since before the Great Recession; personal and corporate income taxes are down; and businesses are choosing places like Rochester, Batavia and Canandaigua as a destination to grow and invest in.