Those who have read the preview of my third book, RECONOMICS (coming January 2020) know that many communities go into decline because they rested on their laurels when times were good. Their attitude wsa “Revitalization? We don’t need no stinkin’ revitalization! We’re in great shape.”

What they fail to realize is that—like all livings systems—cities must constantly regenerate just to remain in their current state. They need to regenerate aggressively if they wish to actually improve on an already-excellent situation. 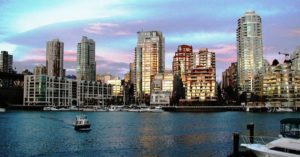 Vancouver, British Columbia, Canada is one of those wise cities that is aggressively regenerating, even thought they are already know as a wealthy metropolis with one of the highest quality of life ratings on the planet. Their impressive, sustained economic growth has brought with it the usual traffic congestion crisis.

Vancouver leaders know that modern, efficient transit systems are needed more than ever to reduce traffic congestion, connect businesses and communities, and meet the needs of a rapidly growing population. Metro Vancouver is home to some of the fastest-growing cities in Canada.

Rather than let cars destroy their famed quality of life, Vancouver and the province of British Columbia are addressing the problem in a way most U.S. cities—whose public transit projects have mostly been killed or put on hold by the Trump administration—can only dream of.

Justin Trudeau said “Bringing light rail to Surrey will transform the city, connect communities and make getting around the Lower Mainland faster and easier. The Broadway Subway will also go a long way in reducing commute times and transit overcrowding, and making Vancouver’s SkyTrain even more convenient and accessible. Our government will continue to listen to communities, and make historic investments in the infrastructure they need, today and tomorrow.”

The Broadway Subway project will add 5.7 kilometres and six stations to the line, bringing frequent and reliable SkyTrain access to one of the most congested transit corridors in Metro Vancouver.

John Horgan explained, “Rapid transit is key to helping people get where they need to go quickly, so we can meet the needs of a growing region. Cutting traffic and getting people and goods moving faster will unlock economic growth, while making our communities more affordable, accessible and clean.”

The Surrey-Newton-Guildford Light Rail Transit project (LRT) will create the first light-rail transit system in British Columbia. With 11 new stations along 10.5 kilometers of street-level track, the LRT will provide much-needed transit services in under-served areas, connect and revitalize communities, and make it easier to travel across the Lower Mainland.

These projects will create thousands of good, middle-class jobs during construction. Once completed, they will meet current and future transportation needs, reduce traffic congestion and air pollution, and create more livable, connected communities.

The Broadway Subway will be able to move 5,100 more passengers per hour, per direction than the existing B-Line bus service it will replace, increasing capacity by 250%. It will also be built to accommodate additional future capacity increases.

In Surrey, the Light Rail Transit project will take people from one end of the line to the other in approximately 27 minutes. The line will operate within dedicated train-only lanes on the road, allowing the trains to bypass traffic queues, making it an attractive public transit choice.

Federal and provincial funding for these projects is the result of a new funding agreement signed by the governments of Canada and British Columbia in the spring of 2018, under the Investing in Canada infrastructure plan. The plan will see $3.917 billion in federal dollars invested in British Columbian infrastructure over 10 years.

Through the Investing in Canada infrastructure plan, the Government of Canada will invest more than $180 billion over 12 years in public transit projects, green infrastructure, social infrastructure, trade and transportation routes, and Canada’s rural and northern communities.

Of this funding, $28.7 billion will support public transit projects, including $5 billion that will be available for investment through the Canada Infrastructure Bank.

Meanwhile, down here in the U.S., the current federal administration is slowly killing dozens of crucially-important transit projects through inaction. Let’s hope we get a little trickle-down intelligence from up North.