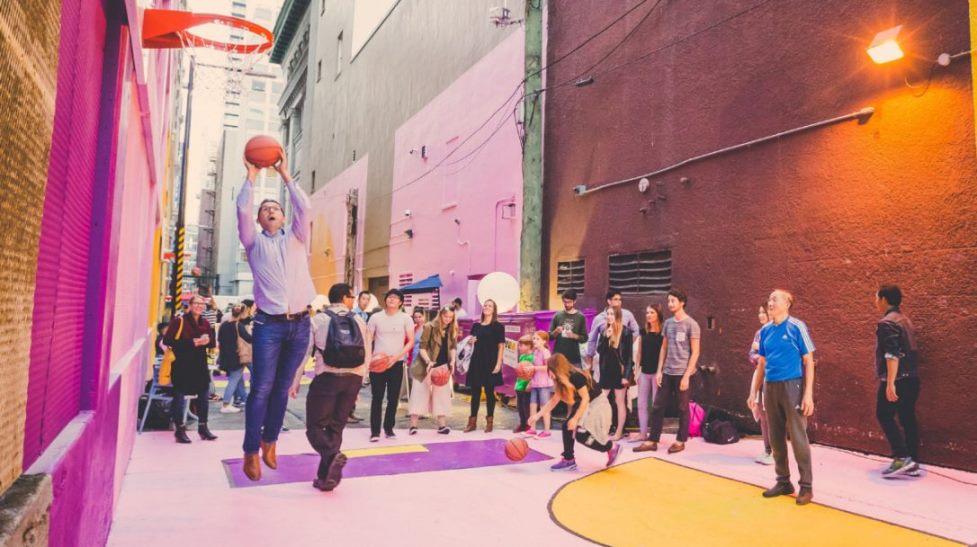 Back alleys are not where most people want to hang out, but increasingly cities in North America, Europe and Australia are revitalizing them and their citizens are loving the results.

Charles Gauthier, president and CEO of the Downtown Vancouver Business Improvement Association (DVBIA) in Vancouver, British Columbia, says for years his members had wanted to perk up the city’s back laneways. “We’d been hearing about overflowing dumpsters, males urinating in the back lanes at night — total disrespect for the space.” Only trucks making deliveries used the laneways, since most people didn’t consider them safe.

With Vancouver’s sky-rocketing real-estate values, underused alleyways seemed ideal to redevelop for public use. It was also a perfect focus for the DVBIA’s Re-imagine Downtown Vancouver initiative.

The DVBIA hired HCMA Architecture + Design to redesign three alleyways for the city: the first being south of West Hastings St. between Granville St. and Seymour St. Gauthier says HCMA proposed the redevelopment of the area to the city. It went for it and gave the DVBIA a grant of $100,000, which covered the basic cost of the first laneway, Hastings West Laneway.

In September of 2016, DVBIA unveiled its first More Awesome Now reimagined laneway. Work is underway to transform the laneway that runs behind West Hastings street between Seymour and Granville, from utilitarian service corridor into a bright, playful public space to be shared by people and vehicles.

More Awesome Now is an experiment in reshaping city laneways into engaging, accessible public spaces that contribute to the vibrancy of the city. The project is a partnership between the DVBIA, the City of Vancouver’s VIVA Vancouver program, and HCMA Architecture + Design.

“Laneways serve an important business function, but for a big part of the day they are underused and full of potential,” says Gauthier. “So we asked, if we make our lanes more appealing, could they become public spaces? More Awesome Now is an experiment in turning laneways into places of discovery – friendly, accessible, and lively parts of the urban streetscape.”

In juxtaposition to its location in the heart of the business district, the reimagined Hastings West laneway is themed “Play”. The lane has been painted in bold pinks and yellows and soon will be outfitted with basketball hoops and furniture. In the coming weeks, decorative lighting and a geolocation orb will be installed. The public is invited to use the laneway for play, exercise, or socializing.

“Boldly re-imaging downtown laneways can bring vibrancy to underutilized spaces in the city year-round,” says City of Vancouver Director of Public Space and Street Use, Margaret Wittgens. “The City is thrilled to be working with community partners to enhance Vancouver’s walkability, liveability and sense of creativity one laneway at a time.”

The laneway will be shared by people and vehicles, which will continue to access the lane for service purposes. There’s no formal schedule of events planned for the space, instead, property owners, tenants, and visitors will share responsibility for enjoying, cleaning, and monitoring it.

Vancouver’s downtown street grid includes more than 200 blocks that are bisected by a lane. Reimagined, these laneways have the potential to increase the public pedestrian area by up to 30%. The Hastings West laneway is the first of what could become a network of interconnected downtown laneways, each with its own sense of place and evolving identity. There are plans to bring the concept to the Granville Street entertainment and Alberni Street fashion districts in the near future.

Last year the DVBIA conducted Re-Imagine Downtown Vancouver 2040, a collaborative visioning process. The desire for more public spaces of every scale, including rooftop patios, animated laneways, and large public squares, was a major theme that emerged from the process.

See full article by George Binks in the Toronto Star.