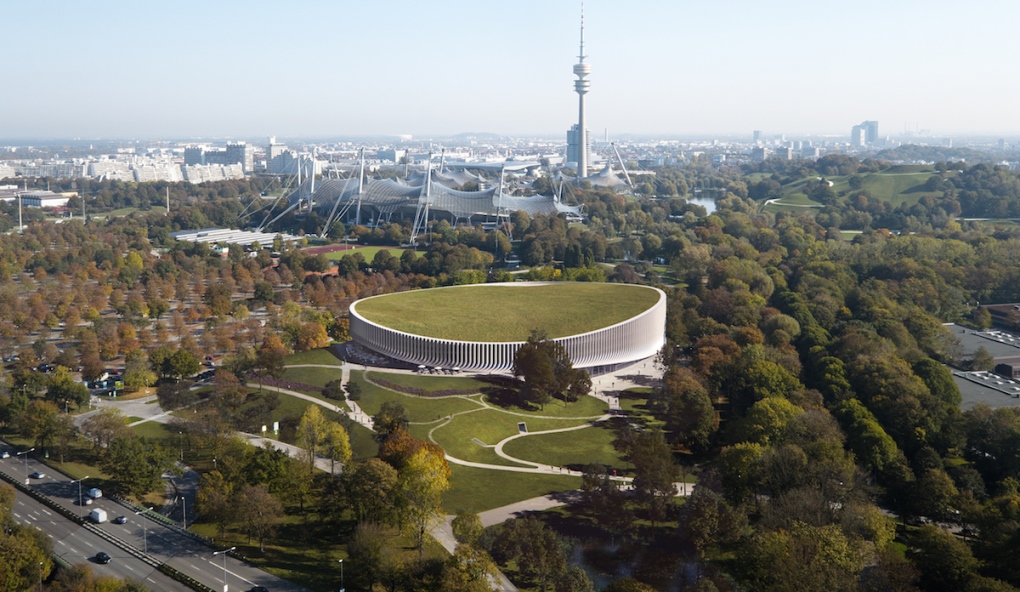 Radstadion was the name of a Olympic velodrome (cycling track stadium) in the Olympiapark of Munich, Germany. Munich hosted the track portion of the cycling competitions for the 1972 Summer Olympics. The track was 285.714 meters (937 feet, 5 inches) long by 7 meters (23 feet) wide with banking that varied between 11.56 and 48.32 degrees. 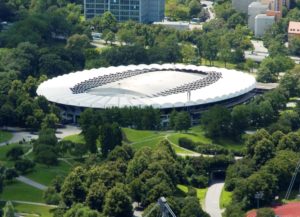 The Radstadion was demolished in 2015 to make way for a new arena.

Now, on February 14, 2019, in the Bavarian capital of Munich, Germany, FC Bayern Basketball, SAP and Red Bull jointly presented the winning design for that new multipurpose sports arena to be built on the old site in the former Munich Olympic Park.

The contract for building the arena was awarded to 3XN Architects of Copenhagen, Denmark, together with LATZ+PARTNER, a German landscape and urban planning firm.

Uli Hoeneß, President, FC Bayern München eV, says “I’m impressed by how the architects of the winning design managed to incorporate the visual character of the legendary Olympic Park. The new arena will be much more than a top-modern sports hall where fans, athletes and our basketball team will feel comfortable. I’m sure that this sports arena with its compelling design, including the green roof, will be an architectural eye-catcher and a great gain for the city of Munich.”

The sports arena, with match seating of up to 11,500, will be the future home of German ice hockey champions Munich Red Bulls and German basketball champions FC Bayern Munich. To improve the local sports infrastructure for schools, amateur clubs and young talents, three additional canopied ice rinks will be built next to the sports arena as training facilities and for recreational use. Therefore, a comprehensive agreement on guaranteed opening times for the ice rinks has been closed with the City of Munich. The building owner of the project is Red Bull Stadion München GmbH.

The new sports arena is a separate oval structure that naturally and respectfully melds into the world-famous Olympic Park with its many iconic buildings. This impression is enhanced by the green roof and vertical facade structure. The facade is dominated by vertical lamellas, swinging upwards over the glass-paneled entrances which are thus beautifully accentuated. The training areas are partially underground and modelled to form a green hill, picking up the topography and enabling a coherent continuation of the pathways and landscape design of the Olympic Park.

“We are delighted to design the new multipurpose sports arena at the Olympic Park in Munich, which will be the fourth arena project for 3XN Architects. It’s a great opportunity to become part of the inspiring, historic architecture of the park. During the design process, we continually thought about the park’s original design and asked ourselves how Günter Behnisch would have approached the task. It was important to us to create a flexible, multipurpose arena with a strong identity while respecting the history and vision of the original Olympic Park and fitting in quite naturally. We want to create the perfect backdrop for a fantastic fan experience,” said Jan Ammundsen, 3XN Architect’s Head of Design.

The groundbreaking ceremony is planned for the coming winter, provided the construction permit and building preparations are obtained in time. Inauguration of the new sports arena is planned for late summer 2021. Utilizing the arena’s full organizational capacity, its two principal future occupants, FC Bayern Munich’s Basketball division and the Munich Red Bulls, can each play up to 40 matches per year. And there is additional capacity for up to 20 other matches and sports events as well as 20 sports-related events. The gross floor area of the new arena will be 673,000 square feet (62,500 square meters).

Christian Schluder of Red Bull GmbH, said “The brilliant design by 3XN Architects integrates harmoniously with the unique ensemble of buildings in the Olympic Park, while at the same time adding its own original, understated architectural expression. This design unites economic viability, sustainability and energy efficiency. That is why 3XN Architects’ design was the best among many great entries. The new multipurpose sports arena will be a new, ultra-modern home for our two top teams, Munich Red Bulls Ice Hockey and FC Bayern Munich Basketball, and their fans. At the same time, the city and its Olympic Park are getting a new landmark. Munich and the two sports clubs will benefit for decades from this privately financed mega-project.”

SAP secured the right to the name of the future multipurpose sports arena in September last year. As a world market leader for business software, SAP will also be the project’s technology and innovation partner. On February 14, a naming competition for the new multipurpose sports arena is being launched using the hashtag #NameGameOn. Future fans and spectators are invited to help find a name for the venue and may enter their suggestions at www.NameGameOn.com. The deadline for entries is March 4, 2019. A jury consisting of representatives of Red Bull, FC Bayern Basketball and SAP will then select a shortlist of names. Finally, members of the public will get to vote for their favorite name online.

Bernd Leukert, Member of the Board and Director Digital Business Services, SAP SE, added “Together with Red Bull and FC Bayern Munich, we’ll offer a very special experience to the fans, based on our innovative SAP solutions. In our role as technology and innovation partner as well as name sponsor of the new sports arena, we want to involve fans in Munich and the world in naming the venue and thereby give them the opportunity to take part in the creation of a piece of sports history. We look forward to receiving a lot of creative ideas for the new name.”

Here are a few details about the new multipurpose sports arena:

Christine Strobl, Mayor of the City of Munich, explained “The sports venues at the heart of the Olympic Park form an extraordinary ensemble and hence demanded a sensitive planning approach to the new sports arena. The design presented by 3XN Architects of Copenhagen and their partnering German landscape planners convinced the jury of the architecture competition in every aspect.”

“The new sports arena will integrate harmoniously with the existing park landscape, while its structured facade and roof greening will create elegant highlights. For the City of Munich, the special agreement to make the ice rinks available to its citizens for 8,000 hours each season presents a unique opportunity to create excellent skating conditions for schools, clubs and the general public. The sports arena will help strengthen the Olympic Park’s position as an outstanding venue for both professional and grassroots sports in Munich,” she concluded.