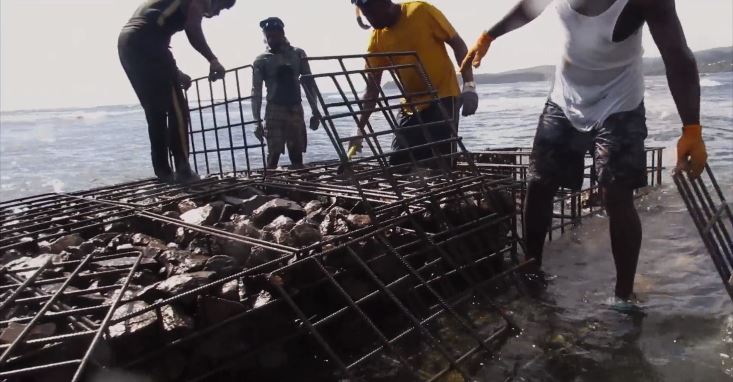 Through the At the Water’s Edge (AWE) initiative, The Nature Conservancy teamed up with local government, community members and partners to strengthen one of Grenville, Grenada’s most powerful allies against climate change—nature itself.

The vulnerable coastline of this fishing town has faced years of erosion caused by the degradation of coral reefs, destruction of mangrove forests and severe storms and flooding brought on by climate change. To build the resilience of this coastline and its community, the Conservancy is working to restore the natural protective ecosystems that are inherently part of the marine and coastal environments. Innovative, engineered reef structures were designed and tested along the shoreline by the Conservancy and local partners.

With the success of this pilot, additional structures will be installed to reduce destructive wave energy and prevent erosion by simulating the architecture of natural coral reefs, while also providing new habitat for coral, fish and other species. In addition, Grenville community members are joining the Conservancy and partners in large-scale efforts to replant and restore mangroves. By combining community engagement with the restoration of natural ecosystems, AWE is helping Grenville become resilient to a changing climate, while rebuilding the marine and coastal resources in which their economy and culture are deeply rooted.

Vera Agostini, Director of Science and Conservation for the Conservancy’s Caribbean Division, points out, “There are many communities around the world that face the exact same problems that Grenville faces. What’s really exciting is that what’s happening here in Grenville can serve as a model for other small island developing states around the world.”