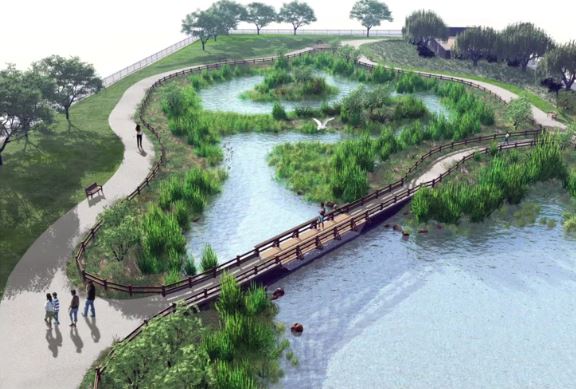 Back in 2014, the South Los Angeles Wetland Park in Los Angeles, California, earned the Envision Platinum award—the highest level attainable in the Institute for Sustainable Infrastructure (ISI) Envision sustainable infrastructure rating system. This video shows how the park has progressed.

The South Los Angeles Wetland Park was the first project in Southern California to receive an ISI Envision award and the second project to receive an Envision Platinum rating.

The South L.A. Wetland Park infrastructure project is located in a historically undeveloped area of Los Angeles County, formerly known as South Central Los Angeles. The project is a result of Proposition O, a program supported by a series of general obligation bonds valued at $500 million, whose projects were conceived to protect public health by removing pollution from the City’s watercourses, beaches, and the ocean to meet Federal Clean Water Act requirements.

“The South L.A. Wetland Park is a good example of an integrated engineering solution that successfully built consensus, captured and improved local urban runoff, and created a new neighborhood-revitalizing amenity. It represents what is possible when an owner and an engineer collaborate and redefine the paradigm of multi-benefit projects,” said Psomas Principal, Director of Sustainability, and Envision Sustainability Professional and Envision Verifier, Sean P. Vargas.

The features of the project that helped the project score highly for sustainability within the Envision framework included remediation of the former Brownfield site, creation of new urban green space, and the engineers’ design of the park to use urban runoff as a treatment-wetland sustaining resource. The South L.A. Wetlands project ranked very highly in many Envision credit areas including:

“The City of Los Angeles and Psomas partnered to deliver a multi-benefit infrastructure project and neighborhood amenity to the residents of South Los Angeles,” said Deborah Weintraub, Acting City Engineer. “This project is transcendent in that it redefines the archetype of what is possible in a highly-urbanized public works environment,” she said.

“ISI’s Envision is a standard providing how new horizontal infrastructure should be planned, designed, and built to incorporate sustainability. In today’s environment, the conditions and constraints under which infrastructure must perform are increasingly challenging,” said ISI Executive Director Bill Bertera.

“Communities are facing new challenges arising from environmental regulations, ever more scarce financial resources, and pressures associated with climate change and global warming. We need to respond to these conflicting priorities in ways that speak to broad public and societal interests,” Bertera said. “The Envision rating system is a part of the answer…to help us not only do the projects right, but to do the right projects,” he continued.