Wakefield is a city in West Yorkshire, England. It sits on the River Calder, and has a population of just under 100,000.

The late 20th century was tough on Wakefield. Its significant glass and textile industries closed in the 1970s and 1980s, and its nearby coal mines were amongst the first in Yorkshire to close under the government of Margaret Thatcher.

But on April 16, 2018, plans were approved to bring some of that industrial heritage back to life. The city will redevelop a complex of derelict historic Victorian mill buildings on the riverfront into a new arts centre.

This mixed use, regenerative project will repair and repurpose the mills into a creative, arts-led masterplan on a site adjacent to The Hepworth Wakefield art gallery. 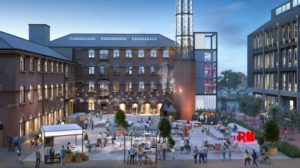 The Wakefield Council has partnered with private developer City & Provincial Properties to create a “northern extension” of their art and media hub in London, which is called Tileyard Studio.

The £80 million redevelopment includes construction of new external stairs and lift cores, repairs and alterations to a damaged chimney to create new sculptural steel lattice replicating its former size. A total of 32,000 square feet of space will also be created in new brick buildings next to the mill.

Hawkins/Brown began working on the design in December of 2015, with the goal of regenerating Rutland Mills into a mixed-use development that provides new complimentary uses to those already in existence around the site. 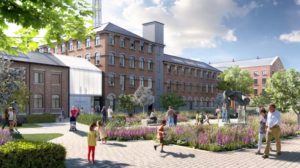 Rutland Mills has been derelict for almost 20 years. During this period it is understood that the condition of the buildings has significantly deteriorated, leaving many in a state of damage and disrepair. In order to secure the future of the complex and the legibility of heritage assets, it is critical to refurbish, re-use and re-purpose the retained buildings.

The vision for Rutland Mills is for a rich mixed-use, inclusive, creative and cultural cluster. The design integrates artists, designers and musicians; digital and tech industries; artisan craft and makers; studios and commercial space; retail; restaurant and hotel offers; event and gallery space and education.

The vision also seeks to deliver a significant offer of new public realm. This includes a central courtyard / event space, new gateways, a new route to the River Calder, a new riverside pier and increased permeability through the site, better linking and connecting the context. 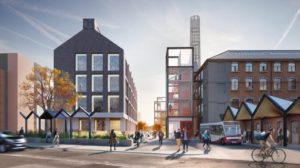 Rutland Mills has a rich history and heritage. The designers want to repair and celebrate the existing buildings whilst also reimagining lost heritage to subtly acknowledge elements of the sites former history. Contemporary interventions in the form of external circulation totems and a new building have been proposed that provide a clear and playful distinction between old and new.

It’s hoped that the stimulating and diverse new offerings at Rutland Mills will entice tourists who are already following the Yorkshire Sculpture Triangle to prolong their stay in Wakefield, while also providing a new and exciting destination for the local community.

The public and private partners believe that the regeneration of Rutland Mills will form a critical, revitalizing next phase in the Wakefield Waterfront masterplan, bringing new coherence to the area while contributing to and expanding on the creative, art and cultural led program currently being curated by The Hepworth Wakefield.

All renderings courtesy of Hawkins/Brown.