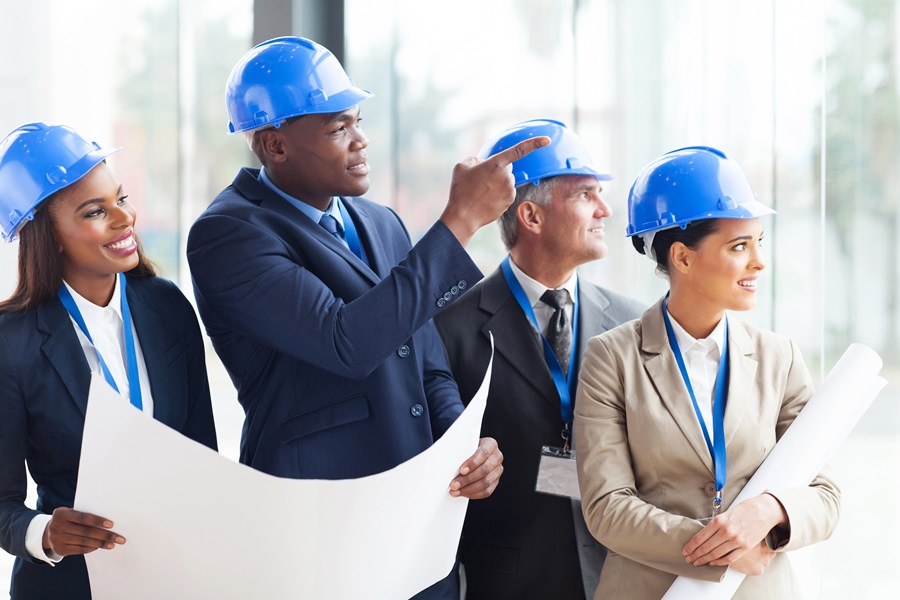 Investors are increasingly pushing for pre-existing technology in infrastructure to be upgraded, the survey found. 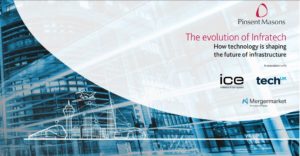 The findings were published in a new report on the evolution of “infratech” by the British law firm Pinsent Masons. Infratech concerns the increasing convergence of digital technologies with physical infrastructure. The Pinsent Masons report was produced in partnership with the Institution of Civil Engineers (ICE) and techUK.

According to the results of the survey, where 60 direct equity investors in the infrastructure sector were questioned on matters relating to infratech, 92% of respondents said they expect to consider technology either often or always when making an investment decision over the next three years, compared to only 49% who said this had been the case over the last three years. 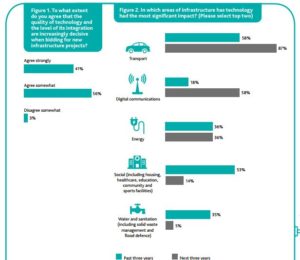 Almost all investors surveyed (98%) said that the businesses that include technology in their plans to develop new infrastructure would make them more likely to invest over the next three years.

“Greenfield infrastructure developments – those built from scratch, such as new roads, bridges and railways – are a risky prospect for investors for three reasons,” the report said. “First, capital is typically tied up for long periods of time before returns are generated. Second, there are uncertainties inherent in all construction projects, including time and cost overruns. Third, returns cannot be accurately anticipated until the asset enters revenue service.”

“However, survey responses gathered from investors suggest that the integration of technology in infrastructure projects can go a long way in reducing the risks and uncertainty around greenfield investments – therefore making them a more attractive destination for investors’ money,” it said.

Greenfield projects are more likely to win investment where technology providers form part of a consortium bidding for the work rather than where they merely act as sub-contractors “passively supplying technology to order”, the study found. 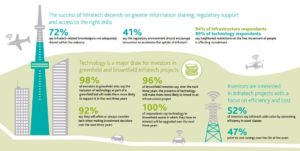 For infrastructure developments on brownfield sites, 96% of investors said they are more likely to support those projects where technology is present in the existing infrastructure assets.

The report also found that investors are planning to take an active part in driving technology upgrades in brownfield assets over the next three years, with 83% saying they plan to do so, compared to 63% who have been significantly involved over the past three years.

All the investor respondents said technology in brownfield assets in which they have an interest will be upgraded over the next three years. “There are some very interesting trends emerging as the convergence between infrastructure and technology starts to take hold,” said technology expert Simon Colvin of Pinsent Masons. “Collaboration and integration are key, whether that be through joint ventures, alliancing type contractual models, or more traditional supply chain arrangements.”

“However, it won’t be simply down to which vehicle is adopted, the report also identified skills gaps as a hurdle to be overcome. Infrastructure sector players need to better understand technology and data and the benefits and risks they bring. Technology providers and operators need to understand the different risk profile attached to build of physical infrastructure and how they work together to mitigate risks for the all providers in the ecosystem. At least we are at a stage where each side knows what it doesn’t know about the other,” Colvin said.

Infrastructure expert Nick Ogden of Pinsent Masons added: “For investors, having technology providers play a leadership role means there are real incentives motivating them to provide the best technology and speed up delivery. Our survey shows that 92% of infrastructure investors will often or always consider tech when making investment decisions over the next three years.”

“So the investors are willing to spend the money which will drive this growing trend. Collaboration is already here, and is only going to increase. On projects where infrastructure and technology are truly integrated, you can imagine there is the potential not just to create more efficient assets but also create new markets that haven’t existed before,” said Ogden.