The Vistula River Boulevards of Warsaw, Poland are one of the most attractive and most frequented public spaces in the city.

When I (Storm) was there doing a talk on urban regeneration for city leaders (sponsored by the U.S. Embassy in Warsaw) about a decade ago, I was struck by two things: how lovely the area was, and how unnecessarily difficult it was to get to. 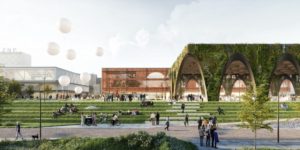 The section between Świętokrzyski Bridge and the Czerniakowski Headland is buzzing with life on summer evenings and on weekends, thanks to the rapidly-growing entertainment and cultural offerings to be found on the boulevard.

The Kahl Square region, on the other hand, remains partly cut off by the Wisłostrada Tunnel entrances and the railway embankment of the cross-city line, forming a kind of barrier between the city and the river. This disconnect stymies the economic and cultural potential this unique riverfront location.

If you’ve read the Resilience Success Guide, you know that reconnection is the step that too many cities forget after they repurpose and renew buildings and public spaces. It’s often the portion of the 3Re Strategy (repurposing, renewing, reconnecting) that contributes the most to revitalization. 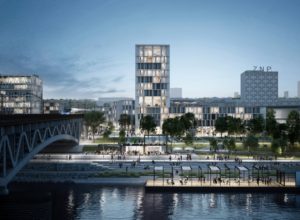 Despite the significant outlays on the construction of the Wisłostrada tunnel, the urban functions remain sectioned off from the riverfront, failing to support or facilitate water-oriented activities.

Now, the Polish architecture and planning firm WXCA has won the masterplan competition to redesign and reconnect a stretch of riverfront along the Vistula River. The plan is to bring the city closer to the riverfront by creating varied-function facilities with easily accessible ground-floor services.

They hope to create the perfect backdrop for the riverfront gardens that form a green belt between the Copernicus Science Centre and the cross-city railroad bridge. The plan’s various zones of the garden – the “Skwer Sportów Miejskich” – an urban spot for sports, the “Polana Sztuki” clearing for the arts, and the “Park Odkrywców” discovery park are an extension of the functions of the buildings surrounding it. Those buildings include the aforementioned Copernicus Science Museum, the Academy of Fine Arts, and the planned sports facilities located on the southern side of the rail bridge. 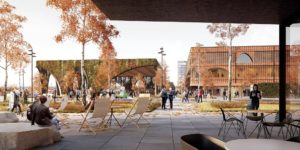 The facilities in the garden belt incorporating a food pavilion and urban roof will allow the riverfront recreational season to be extended and their greenery structure to emphasize the nature of the green urban oasis along its entire length.

The balanced spatial layout aims to allow optimal use of this space both in economic and social terms. The creation of a public access square along the riverfront, rich in new functions and covered activity areas, will stimulate and inspirit this part of the embankments at different times of the day throughout the year. The creation of new spaces that can be built-up not only under urban but also commercial investments can make the entire process more feasible through the sharing of the investment expenses linked to extending the Wisłostrada Tunnel.

Warsaw’s space is full of contradictions and is exposed to the conflicts existing between particular social groups. Investment pressure combined with the difficulties inherent to the planning process raise increasingly new disputes, usually in the context of the depleting city stocks of greenery. 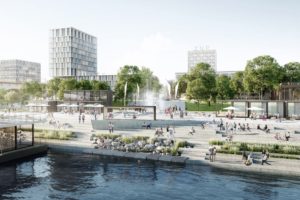 The need to come into contact with nature and the presence of greenery in the city center is one of the most common issues cropping up in urban community discussions.

On the one hand, the rational construction of a compact city is one of the foundations of sustainable development, although this often contradicts the dreams of living amidst parks of many city dwellers.

WXCA’s concept aims to strike a balance between the urbanized environment and the natural landscape, which can assist reducing the sphere of disputes and building the right concept for the Vistula riverfront in agreement with the varied stakeholder groups.