For over a century, Newton, Iowa, was the quintessential company town. It put all its economic eggs in one basket. And, as so often happens in such situations, someone dropped the basket.

Maytag started building washing machines in Newton in 1893. The company grew into a global brand, and Newton, a city of 15,000, prospered along in tandem.

But in 2006, Whirlpool bought Maytag, and relocated manufacturing to other U.S. states, and to Mexico.

When Maytag closed its doors in 2008, it was a painful transition for Newton. At the time, some 2,000 people were building washers and dryers at the old Maytag manufacturing facility. The cavernous building is the size of seven average-sized Walmarts

Unlike so many similar stories that have played out across the United States, this is one of rebirth, not lingering depression. “The unemployment rate in 2009 was 9.9 percent, and today it’s at 3.5 percent,” said Frank Liebl, executive director of the Newton Development Corporation (NDC).

Newton’s simple strategy? Communicating that the community is not just ready to work, but that it has the skills, structures, and infrastructure to quickly get a new operation up and running. 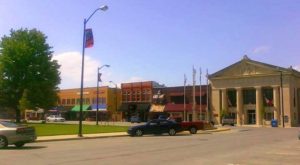 An example is Arizona-based TPI Composites, which makes wind turbine blades.  Its Newton factory produces 27 blades per week, stretching 187 feet in length (three blades make a set). Of course, since Newton was competing with desperate cities all across the country, they had to sweeten the pot with $8 million in loans, grants and tax breaks.

Since arriving in Newton a decade ago, TPI has grown from a handful of workers to over 1100. Mindy Pollock, who cuts fiberglass for wind blades, had been at Maytag for 22 years when she was let go. “I’ve seen grown men crying that day,” said Pollock. 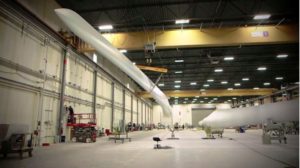 According to BNEF, from 2000 to 2014, the cumulative global power generating capacity in gigawatts, or GWs, grew at an average annual rate of 25%. Cumulative installed capacity is led by China (approximately 110 GWs), the United States (approximately 64 GWs) and Germany (approximately 40 GWs).

In addition, from 2008 to 2014, the cumulative global power generating capacity of wind turbine installations in GWs increased by more than three times. Wind energy is now used in over 80 countries, 24 of which have more than 1 GW installed. The rapid growth in the wind power generation industry has been driven by population growth and the associated increase in electricity demand, widespread emphasis on expanded use of renewable energy and water resource management, the increasing effectiveness and cost- competitiveness of wind energy and accelerated urbanization in developing countries, among other factors.

Onshore wind LCOE—which reflects the levelized cost of energy per megawatt hour of a generation project over its lifetime—is now on par with combined new cycle gas turbines and substantially below solar photovoltaic, according to IEA. The advancement of turbine technology, including larger rotor diameters and higher hub heights, has increased energy capture, thus reducing LCOE for onshore wind. The proliferation of cost-effective wind generation enhances energy resource diversity and mitigates the price volatility associated with fossil fuels, thereby helping to stabilize overall electricity costs in the long term.

Wind energy projects do not require any fuel, such as natural gas or coal, during operation, and we believe that they are typically constructed within a substantially shorter period of time relative to conventional generation resources. In addition, to reduce carbon emissions and dependence on fossil fuels, governments in many countries have adopted renewable energy targets and have financially incentivized investment in wind energy projects.