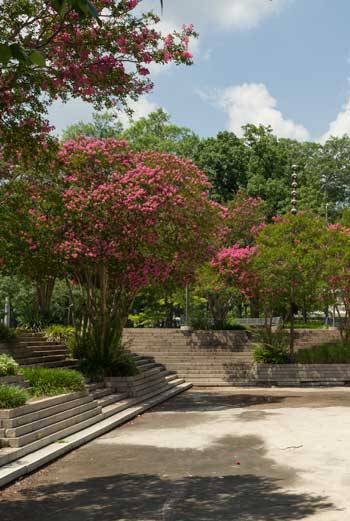 Depending on your perspective, Pershing Park, which stands on a central spot on Pennsylvania Avenue in Washington, D.C. is either a unique, Modern landscape that deserves to be protected under the National Register of Historic Places, or an outdated, unwelcoming park that fails to meet the needs of its visitors and needs to be redesigned.

The Cultural Landscape Foundation (TCLF) sees Pershing Park, which was completed in 1981 but has since fallen into a state of disrepair, as worthy of rehabilitation.

Designed by landscape architect M. Paul Friedberg, FASLA, with a subsequent planting design by Oehme, van Sweden, it was once a striking urban park and it houses a protected memorial to WWI General John Pershing.

But the leaders of the World War I Memorial Centennial Commission, which was created under an Act of Congress, would like to see a new design for the site. Their more traditional design aims to improve access and use bas-relief on 10-foot-high walls to tell a rich story of World War I.

Meanwhile, all parties are awaiting word from the National Park Service, which should decide shortly on whether the park will be included in the National Register of Historic Places.

If it is, the commission’s ability to alter Friedberg’s design will be greatly circumscribed.

Note from Storm: I cross through Pershing Park fairly regularly, and it’s always struck me as being ugly and uninviting. While I can empathize with those who wish to preserve landscape architecture history, the 60s and 70s were the Dark Ages of architecture, and much of it was simply awful. We should probably keep some of it as a warning to future generations to be careful of architectural fads (like Brutalism), but beautifying a city means ridding it of ugliness…old and not-so-old.