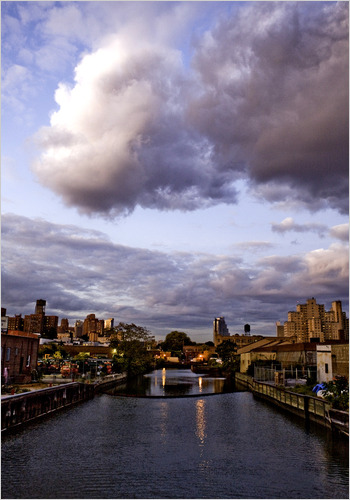 This 2009 New York Times article reported on the Bloomberg adminstration’s intention to revitalize one of the most polluted place on Earth: New York City’s Gowanus Canal.

The Gowanus Canal runs one and a half miles through brownstone Brooklyn, cutting a disreputable gash between two of the most desirable residential neighborhoods in New York City.

Sunken below street level, no more than 100 feet across at most points, the canal does not really flow — it skulks. On sunny days, its waters take a greenish hue and are clear enough to afford glimpses of rotting bulkhead timbers, mud-caked tires and other submerged detritus. When it’s overcast, the water turns an inert gray.

In the lawless old days, industries along the canal’s banks fouled it with all kinds of pollution. Today, the canal is mostly disused, a corridor of warehouses and razor wire, and the most enduring reminders of its colorful past emanate from several underground deposits of coal tar, which belch up oily bubbles. The residue forms a prismatic sheen on the canal’s surface, reflecting shimmering visions of the landscape.

Created in the mid-19th century out of a tidal creek named for an Indian headman, the Gowanus long resisted attempts at reformation, in sluggish defiance of generations of city planners, civic do-gooders, editorialists and speculators.

But over the past decade, the government has cleaned up the water a bit, allowing the canal to be recolonized by some hardier forms of natural life — shore crabs and cormorants, silvery bait fish — along with enterprising humans. First came the artists for the cheap studio space, then the hipsters for the decayed authenticity, and finally, in the inevitable progression, residential developers arrived.

The Bloomberg administration, sensing a chance for revitalization, rushed to rezone 25 blocks of the Gowanus area for nonindustrial uses, identifying more than 60 development sites with a potential to generate at least $500 million in tax revenue. It didn’t appear to be a deterrent that the canal was, quite literally, still something of a cesspool.