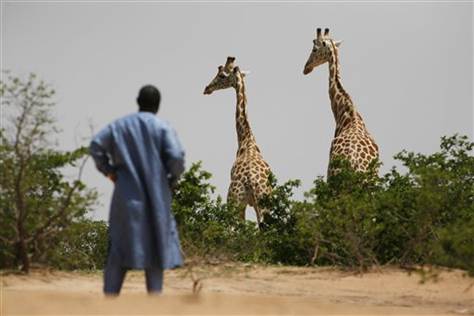 This 2009 article reported the successful, if surprising, recovery of giraffe populations in West Africa.

REVITALIZATION readers familiar with current health of West African giraffe populations, and of any new efforts to restore them, are invited use the Comments section below to share their insights. ^^^^^^^^^^^^^^^^^^^^^^^^^^^^ The tallest animals on earth are wandering around the countryside of Niger. But by all accounts, they shouldn’t be.

A hundred years ago, West Africa’s last giraffes numbered in the thousands and their habitat stretched from Senegal‘s Atlantic Ocean coast to Chad, in the heart of the continent.

By the dawn of the 21st century, their world had shrunk to a tiny zone southeast of the capital, Niamey, stretching barely 150 miles long.

The numbers of the Western subspecies dwindled so low that in 1996, they numbered a mere 50.

Instead of disappearing as many feared, though, the giraffes have bounced miraculously back from the brink of extinction, swelling to more than 200 today.

They are so used to humans, tourists can walk virtually right up to them. “It’s quite special in Niger how habituated they’ve become,” says Julian Fennessy, a Nairobi, Kenya-based conservation expert. “You don’t normally find giraffes living so close to villagers.”

Since 1996, Niger’s giraffe population has expanded by 12 percent per year — three times their average growth rate on the rest of the continent. One reason: they face no natural predators. Poachers around Koure long ago wiped out the region’s lions and leopards — which can claim 50 to 70 percent of young giraffes before they reach their first year.

Another reason: Giraffe hunting is now prohibited in many countries. And some, like Kenya, have taken giraffe meat off the menu of tourist restaurants that once served them up on huge skewers.