When you think of a city, what comes to your mind? Skyscrapers? Subways? Crowds of people jostling each other as they head to work?

And what comes to mind when you think of an Eastern Caribbean island? Sun, sand, beaches paradise? 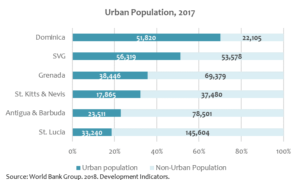 Yet, Eastern Caribbean countries also have cities of thousands of people. In 2017, 35% of the Eastern Caribbean—defined here as Antigua and Barbuda, Dominica, Grenada, St. Kitts and Nevis, St. Lucia and St. Vincent and the Grenadines (SVG)—population was urban: 221,000 out of 628,000 people lived in cities.

These cities are usually the country’s political, business and cultural centers. They also concentrate high percentages of economic activity and GDP generation. Close to 45% of St. Lucia’s GDP is generated in the capital city, Castries, for example.

While the paradise you imagine is real, these cities are also plagued with challenges seen in other large cities around the world, such as aging infrastructure, housing deficits, poor traffic management, inefficient public services, and inadequate solid waste management and drainage systems. In addition, many informal settlements exist in and around the cities, and some of these have higher crime and violence rates.

On top of these challenges, there is a substantial risk of disasters. Given their location on the path of the Atlantic hurricane belt and their rugged topography, Eastern Caribbean countries are highly exposed to hydro-meteorological and geological hazards. As a recent World Bank study identified, small island economies can be hit the hardest by natural disasters but their impact least visible on the global stage because the overall size of GDP loss is small.

However, when the percentage of GDP loss is considered, many small states have some of the highest losses in the world, with Caribbean nations ranking among the top 25 out of 175 countries. Just in the last two decades, these countries have experienced hydro-meteorological disasters costing on average USD 206 million annually. Most recently, in September 2017, Hurricane Maria devastated Dominica resulting in 30 deaths and causing USD 1.3 billion in damages and losses (approximately 226% of the GDP).

Given this unique set of challenges and scale, building urban resilience in the region will take smarter land use planning and investments infrastructure to curb the impacts caused by storms, flooding, and other disasters. It will also require creating a fiscal space through relevant fiscal rules and disciplines, and efficiencies in public financial management for resilient investments and addressing the fiscal vulnerability driven by high indebtedness.

There is still substantial work to do in supporting Caribbean nations advance their urban resilience agenda, and we welcome your thoughts on relevant solutions and ways to integrate innovation and disruptive technologies into this agenda.

Photo of Castries, St. Lucia via the World Bank.