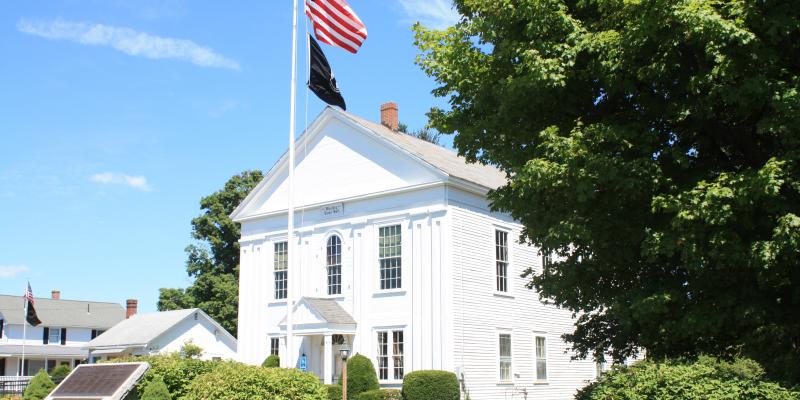 Whately, Massachusetts town officials are drafting preliminary plans to revamp and preserve the historic center district, making it more viable for local public use, and they’re looking for public input.

“This project is related modestly to the ongoing work to consider how to rehabilitate and make useful the town hall,” said Historical Commission Member Donna Wiley about an ongoing center district revitalization project.

The first is the Town Hall, a building that hasn’t had a defined purpose since the town offices moved.

After that is a landscaping and accessibility initiative — mostly related to traffic control, sidewalk restoration and tree maintenance — put forward by the Historical Commission.

To achieve uniformity and address prevailing preservation needs, the Selectboard appointed a committee to investigate ways to revitalize the center district. “We were talking about the fact that the historic district is a mix between government buildings and residential,” Wiley said

Whately was settled in the 1600’s, in an area along the Connecticut River that belonged to the Norwottucks, or Fresh Water Indians, under Chief (Sagamore) Quonquont. Originally part of Hadley, the land in Whately was purchased by Hatfield in 1695 from Quonquont’s widow and children, by a deed which still exists. Whately was incorporated in 1771 and named by then Governor Hutchinson for Thomas Whately, a political mentor of his in the British Parliament.

Early settlers grew crops on the fertile valley and uplands, hunted in the forests, and built mills along the many brooks. Pits of red clay common to most New England Towns had enough of granite and ferrous deposits to make good bricks and to provide material for twenty-one potters in Whately between 1778 and 1861. Beds of lead, potash, umber, and sienna supplied incomes for many in the late 1800’s. Abundant streams allowed the development of numerous mills in the 18th and 19th centuries, first of grist and sawmills, later of woolen and furniture mills. As a result of Whately’s abundant water resources, the neighboring towns of Deerfield and Northampton take their water from Whately’s two largest streams, West Brook and Roaring Brook.

Whately’s three by six-mile area covers some of the most fertile Connecticut Valley land in New England, and is one of the few areas where the finest textured, truest flavored Sumatra tobacco could be grown north of Indonesia. Tobacco has been a cash crop since the mid-1800’s, and was a particularly large source of income and a way of life in this area from the 1940’s through the 1960’s. Agriculture is still a vital element of the economy; in addition to tobacco, other important crops include vegetables, nursery plants, apples, berries, and maple syrup. Whately’s farms today include innovative institutions such as Nourse Farms, renowned as a small fruit nursery, and Nasami Farm, new home to the Massachusetts Wildflower Society. In addition, Whately is home to a significant acreage of Certified Organic vegetable farms.

Whately’s main street, Chestnut Plain Road, is lined with historic buildings such as the Town Hall and the Congregational Church, as well as many historic houses. With its large trees set back from the road, it is said to be one of the finest main streets in New England. The Whately Historical Society and Historical Commission are both active in town, with public events in the spring and fall.

See full article in The Recorder by Andy Castillo.