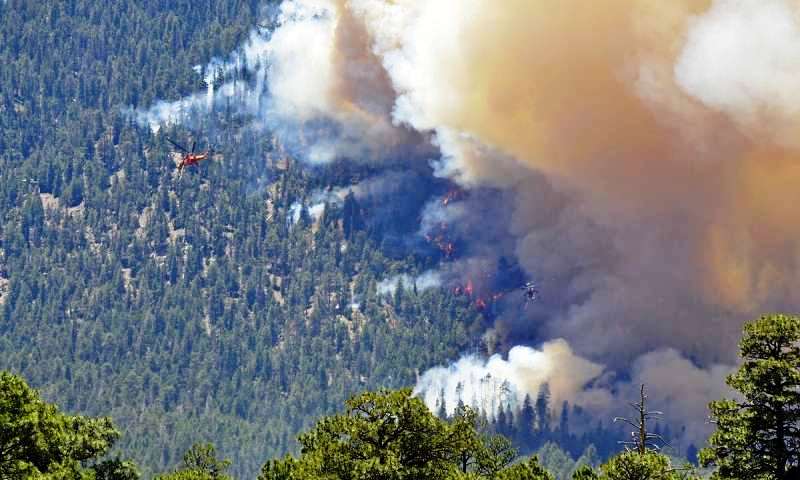 When wildfires burn up forests, they don’t just damage the trees. They destroy a key part of the global carbon cycle. Restoring those trees as quickly as possible could tip the scale in favor of mitigating severe climate change.

Lisa A. McCauley, a spatial analyst at The Nature Conservancy, explains how quick action to thin out vegetation will actually increase carbon storage in forests by the end of this century. Her new paper was published in the Ecological Society of America‘s journal, Ecological Applications, and she presented the findings at ESA’s 2019 Annual Meeting in Louisville, Kentucky.

“With predictions of widespread mortality of western U.S. forests under climate change,” McCauley states, “our study addresses how large-scale restoration of overly-dense, fire-adapted forests is one of the few tools available to managers that could minimize the adverse effects of climate change and maintain forest cover.”

Forests are a vital carbon sink—a natural sponge that pulls carbon out of the atmosphere through plant photosynthesis. Because carbon dioxide (CO2) emissions from human activities are a major cause of climate change, forests do humanity a huge service by disposing of much of its gaseous waste.

Unfortunately, wildfires are more common than they used to be. Higher tree density, more dry wood for fuel, and a warmer, drier climate have caused an increase in the frequency, size, and severity of wildfires in western U.S. forests. Restoring forests in a timely manner is critical in making subsequent wildfires are less likely.

The U.S. Forest Service states that rehabilitation and restoration takes many years, and includes planting trees, reestablishing native species, restoring habitats, and treating for invasive plants. There is an urgent need for such restoration in the southwest U.S. to balance out the carbon cycle.

Enter, the Four Forest Restoration Initiative (4FRI). The U.S. Forest Service began the 4FRI in 2010 to restore 2.4 million acres (3750 square miles) of national forests in Arizona. The goals of the 4FRI are to restore the structure, pattern, composition, and health of fire-adapted (dependent on occasional fires for their lifecycle) ponderosa pine ecosystems; reduce fuels and the risk of unnaturally severe wildfires; and provide for wildlife and plant diversity.

Doing so involves a full suite of restoration projects that are carried out by U.S. Forest Service personnel, partners and volunteers, and contractors. Managers of the four forests—the Kaibab, Coconino, Apache-Sitgreaves, and Tonto—are engaged in a huge, collaborative initiative to with a diverse group of stakeholders to explore the best methods for restoring the ponderosa pine forests in the region.

One such exploration is a study in which researchers, including McCauley, use computer simulations to see how the carbon cycle and wildfire severity between the years 2010-2099 would be influenced by different rates of restoration of about 1500 square miles of forest.

A potential drawback to a very rapid restoration plan is that it includes the thinning out (harvesting) of dense, dry trees—possibly by controlled burns—to get rid of plants that could act as potential wildfire fuel. Reduction in overall vegetation could mean that the overall carbon uptake and storage of these forests would drop.

“The conventional wisdom has been that forest restoration in the western U.S. does not benefit carbon stocks,” McCauley says. “However, with wildfire size, frequency and severity increasing, we believe that additional research is needed across more forests so that we can better understand the fate of carbon and forest cover, particularly for fire-adapted forests where tree densities exceed historical norms and the risks of climate-induced forest loss are increasing.”

Interestingly, the simulations show that despite early decreases in the ecosystem’s stored carbon, a rapid restoration plan increases total carbon storage by 11-20%, which is about 8-14 million metric tons of carbon by the end of the century. This is equal to the removal of carbon emissions from 67,000-123,000 passenger vehicles per year until 2100.

Restored forests provide other benefits than just increased carbon storage in the next century. A restored fire-adapted forest would be less dense, with fewer trees but more diversity, allowing more sunlight to penetrate the canopy, increasing cover of grass and encouraging a more diverse understory. The wildfires that do occur would burn at lower severity as ground fires that consume grasses rather than torching canopies that kills trees.

McCauley says this study is unique because it is a large, landscape-scale study that uses data from a real-world restoration project—the largest restoration being implemented in the U.S. The results are indeed promising, indicating that restoration is likely to stabilize carbon and the benefits are greater when the pace of restoration is faster.

This article by Zoe Gentes of the Ecological Society of America originally appeared on Phys.org. Reprinted here by permission.