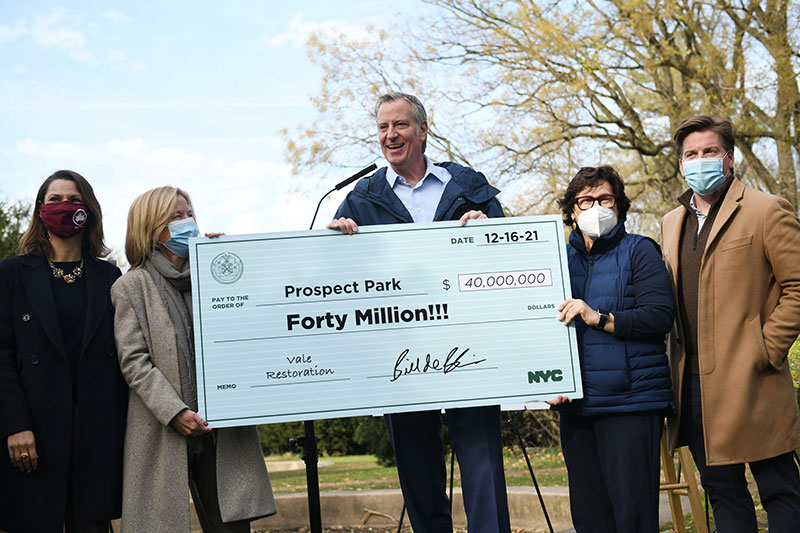 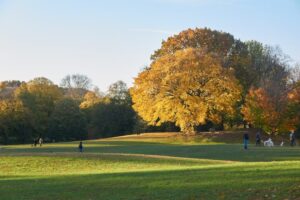 “We are excited to work with our partners at the Prospect Park Alliance who provided the vision and advocated for this multifaceted project. Upon its completion, the Vale will be home to an amphitheater, a pollinator meadow and so much more. This amazing new space will serve Brooklyn for generations to come,” she added.

This funding is the largest single allocation in the history of Prospect Park Alliance, the non-profit that sustains the park in partnership with the city, and will restore important landscapes within the 26 acres in the northeast corner of the park called the Vale.

“Prospect Park is Brooklyn’s backyard,” said Mayor de Blasio. “It’s where I got married and raised my family, and where New Yorkers of all backgrounds come to spend time in nature. This historic $40 million in funding will ensure the Vale is restored to its full glory.”

“Our vision of equity for New York City has always been to make all neighborhoods across the five boroughs safer, more welcoming, and, thus, more livable than we found them,” said Deputy Mayor for Housing and Economic Development Vicki Been.

“As we march on in our fight against COVID, we must prioritize our green spaces—where loved ones gather to celebrate life and where we often venture alone to escape the hustle and bustle of the city. This investment drives home not only the importance of our parks, but the City’s passion for creating and maintaining holistic communities where New Yorkers are proud to live, work, and play,” she added.

The $40 million in capital funding from the Mayor will help to restore two historic landscapes: the Children’s Pool and the park’s former Rose Garden.

The former Rose Garden has served many functions since the park opened in 1867. It was originally a Children’s Playground, complete with the park’s first, horse-driven carousel, and then became a formal Rose Garden at the turn of the 19th century. With the opening of the Brooklyn Botanic Garden in 1911, the Rose Garden eventually fell into disrepair and the rose beds were removed.

“Mayor de Blasio’s historic $40 million investment in the Vale will have a tremendous impact on Brooklyn’s incredible crown jewel, Prospect Park. I know that NYC Parks and Sue Donoghue and the Prospect Park Alliance will implement this vital restoration with committed stewardship and I am so grateful as an elected official who represents the park for their continued partnership,” said New York State Assemblymember Robert Carroll.

In 2017, Prospect Park Alliance, which sustained this landscape of the park for many decades, embarked on an intensive community outreach initiative, Reimagine Prospect Park, to create a new vision for this landscape, working with Hester Street and Grain Collective to engage over 2,000 community members.

Through this process, the team identified several possible amenities for this area of the park, including a sensory garden and rustic arbor; a nature play area for families; and a landscaped amphitheater and small building with flexible gathering space and restrooms for the community’s enjoyment. With funding now in place, Prospect Park Alliance and NYC Parks will embark on the design process in early 2022, and the Alliance will partner again with Hester Street to engage the community in the process.

The site of the historic Children’s Pool originally featured a small pond where children sailed miniature boats, surrounded by ornamental trees and shrubs. In the 19th century the Brooklyn Eagle described this spot as a “bird’s paradise,” which still holds true today. In the 1890s, the renowned architects McKim, Mead and White replaced the pond’s soft edge with a formal marble and granite balustrade. Nicknamed the “Vale of Cashmere” after a Thomas Moore poem, it became famous for its lush, colorful foliage. Red-brick walkways, lights and benches were added in the 1960s, and in recent decades it has fallen into a state of disrepair.

“Prospect Park is known as “Brooklyn’s Backyard” and it serves as a wonderful resource for all New Yorkers to enjoy the gifts that nature has bestowed upon us. I want to commend and thank Mayor Bill de Blasio, NYC Parks Commissioner Gabrielle Fialkoff, Chair Iris Weinshall, and The President of The Prospect Park Alliance Sue Donoghue, who are working together to restore The Vale in Prospect Park through a $40 million allocation in the City Budget,” said New York City Council Member Mathieu Eugene.

The restoration of the Vale is the centerpiece of several restoration projects that have been achieved in recent years in this corner of the park. This includes the Flatbush Avenue Perimeter restoration through funding from Brooklyn Borough President Eric Adams and Majority Leader Laurie Cumbo, and the creation of two new entrances to this area of the park, the first since the 1940s, through Mayor de Blasio’s Parks without Borders initiative.

“Prospect Park Alliance was founded over 30 years ago to sustain, restore and advance the park for the entire Brooklyn community. Today, through this historic funding allocation from the Mayor, we will be able to realize the community’s vision for the 26 acres in the northeast corner of the park. Since its founding, the Alliance has restored significant landscapes and buildings in the park, from the 150-acre woodland Ravine to the 26 acres in the southeast corner of the park, Lakeside and the LeFrak Center. It is critical to advance this work to make the park fully accessible and welcoming for our community,” said Sue Donoghue, President, Prospect Park Alliance.

Design of the Vale Restoration is slated to begin in 2022, and the project will proceed through the New York City Parks design and construction guidelines, which includes a year for design, a year for procurement, and 12-18 months for construction.

“I am thrilled that we will continue our duty as stewards of the Park by investing this needed capital money in the Vale in Prospect Park,” said New York City Council Member Brad Lander. “The pandemic has shown the whole City that our parks and our green spaces are a way for us to connect, and keep us healthy! We must continue to create and care for our spaces, so New Yorkers for all ages will enjoy our beautiful Prospect Park for generations to come.”

The Prospect Park Alliance is the non-profit organization that sustains, restores and advances Prospect Park, “Brooklyn’s Backyard,” in partnership with the City. The Alliance was founded in 1987 to help restore the Park after a long period of deterioration and decline.

Today, the Alliance provides critical staff and resources that keep the Park green and vibrant for the diverse communities that call Brooklyn home. The Alliance cares for the woodlands and natural areas, restores the Park’s buildings and landscapes, creates innovative Park destinations, and provides volunteer, education and recreation programs. Prospect Park is Brooklyn’s flagship park, with more than 10 million visits each year.

Learn more about the Vale restoration.