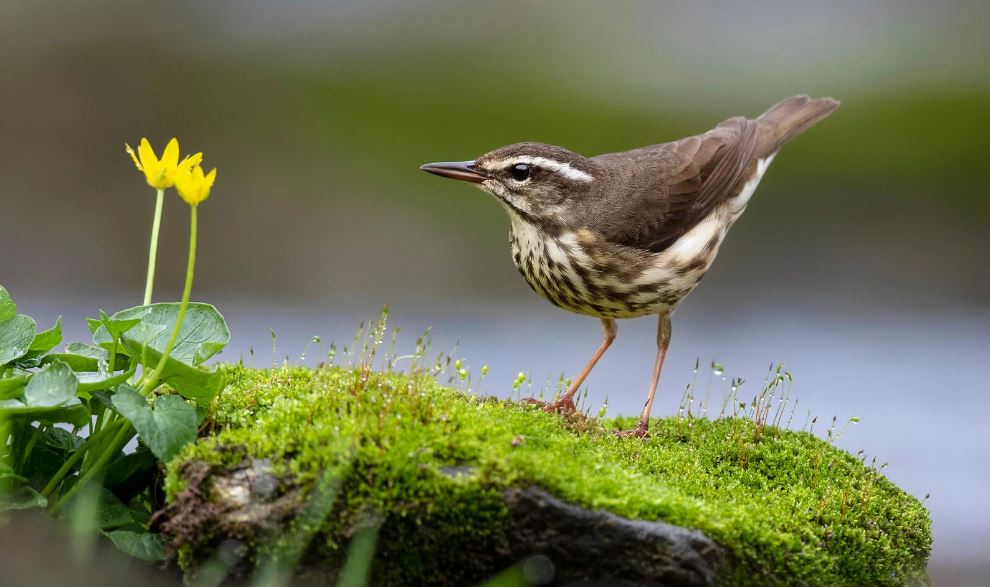 This project will also provide habitat for pollinators and other types of wildlife. In addition to increasing the number of native plants that provide food and habitat for birds, this project will restore the health of Cobbs Creek by improving the riparian buffer zone, reducing erosion, and removing plastic pollution and trash.

The Delaware River Watershed encompasses over 13,500 square miles. The watershed is home to over 4 million people and supplies water to over 13 million.

Over 400 species of birds live here in a variety of habitats, ranging from the upland forests of New York’s Catskill Mountains to urban areas like Philadelphia and Trenton and down to the vast shores of the Delaware Bay. Such a wide variety of habitats requires unique conservation needs, due to the different types of threats that occur throughout the region.

In the central portion of the watershed that includes Philadelphia, birds like the Ruddy Duck and Louisiana Waterthrush rely on waterways and riparian habitats along with other urban green spaces as stopover locations during migration and for breeding or wintering areas.

Unfortunately, these habitats are threatened by interconnected challenges of water pollution, habitat degradation, and climate change.

Increased flooding inflicts significant damage on communities and habitats as storms become more frequent and more damaging because of climate change. In addition to causing costly community and property damage, flooding also erodes streambanks and riverbanks that birds need, while increasing stormwater runoff that can carry chemical pollutants, dirt, and trash into waterways.

This is especially prevalent in urban areas where older systems of stormwater control can mix stormwater with sewage; this polluted runoff then overflows into backyard creeks and streams during periods of heavy rain. As natural spaces are replaced by buildings and impermeable surfaces like roads and parking lots, birds and other wildlife lose valuable habitat.

Climate change is also fueling sea-level rise that is submerging coastlines and associated wetlands while gradually pushing the salt water line further upstream. This intrusion of salt water threatens locations where people and birds along the Delaware River require fresh water. And, we know that climate change is directly threatening 389 species of birds with extinction unless action is taken now.

In Philadelphia, the largest urban center within the watershed and an Urban Bird Treaty City, Audubon Mid-Atlantic is working to address these threats.

Audubon and community partners are revitalizing city parkland and parcels of barren land in Southwest Philadelphia with native plants to help reduce stormwater runoff and provide habitat for butterflies and other pollinators.

These areas will also provide stopover habitat for migratory birds like the Black-throated Blue Warbler and Wood Thrush. Community residents and students play a key role in executing these projects while also influencing improvements needed in communal spaces such as vegetable gardens, meditation spaces, and seating.

Conserving green spaces in cities like Philadelphia provides healthy, natural habitat for birds and other types of wildlife. And by protecting and restoring urban riparian or wetland habitats, we also provide natural infrastructure that will help to reduce flooding and water pollution to the benefit of people and birds alike. Birds and people throughout the Delaware River Watershed are benefiting from our on-the-ground conservation efforts.

Photo of Louisiana Waterthrush is by Cameron Darnell/Audubon Photography Awards.

This article originally appeared on the Audubon website. Reprinted here (with minor edits) by permission.