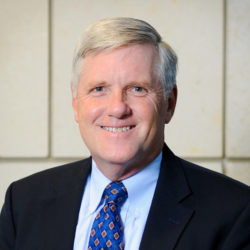 Recently, David J. Hayes, JD ’78, returned to the Stanford Law School as a visiting lecturer after serving in the White House as Special Assistant to President Biden for Climate Policy. His diverse career spanning private practice, government service, and academia has made him a leading national voice on climate change policy.

While in the Biden administration, Hayes worked with the National Climate Advisor and the cabinet-level National Climate Task Force on a broad range of policies, including reducing methane and other greenhouse gas emissions, and accelerating the United States’ transition to a clean energy economy through offshore wind, transmission and other projects. Chief among his accomplishments was the establishment of a first-ever, “whole of government” effort to improve the United States’ resilience in the face of climate change. 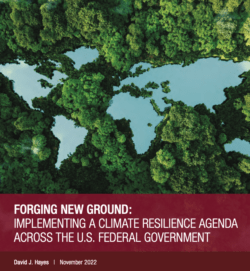 In the November 2022 paper, he describes how the administration is deploying new interagency working groups to help communities face the most serious climate impacts, namely wildfire, drought, floods, extreme heat, and coastal impacts.

Hayes’ paper urges the Biden administration to work with Congress to institutionalize and expand the administration’s climate resilience agenda, in close partnership with state, tribal, and local leaders.

Here in this Q&A, Hayes discusses his paper and his time in the Biden White House.

Welcome back to Stanford Law School. Can you speak a little about your almost two years as the Special Assistant to President Biden for Climate Policy and your time with the Department of the Interior under Presidents Obama and Clinton?

I was truly fortunate to work in the White House during a time of historic executive and legislative progress on tackling the climate crisis under President Biden’s leadership. My White House experience was markedly different from my previous government stints as the Deputy Secretary and chief operating officer at the Department of the Interior. Interior is a huge organization of 70,000 employees and a broad mission to help manage the nation’s cultural and natural resources, including more than 20 percent of the landmass of the United States. I loved working at the Interior Department and helping to resolve thorny land, wildlife and water resource conflicts that, in many cases, implicated many of our nation’s core values and touched the lives and livelihoods of many Americans. Also, and pertinent to my recent role in the White House, knowing how large agencies work enabled me to engage with leadership at EPA, Energy, Defense, Transportation, Commerce, Interior and other major departments and help construct the type of cross-agency, “whole-of-government” collaborations needed to take on the climate crisis.

Can you summarize the new architecture the Biden administration is building to combat climate change?

In an Executive Order that President Biden issued shortly after taking office, he acknowledged the immense bureaucratic challenge of coordinating federal forces to combat climate change from all angles: reducing emissions, pivoting to clean energy, and addressing climate impacts. Because these climate issues touch every major federal agency, the President has prioritized having the new White House Climate Policy Office organize federal agencies to combat the climate crisis through a government-wide approach. This was much of my focus in the White House.

All are guided by the Administration’s “Justice40” commitment to ensure that 40 percent of the benefits of climate expenditures flow to disadvantaged communities.

Now that these wheels are in motion, what are the next steps?

What I’m recommending in my paper is that these foundational efforts be supplemented by Congressional enactment of the proposed bipartisan National Climate Adaptation and Resilience Act. This would institutionalize the new interagency working groups and call on a Chief Resilience Officer, who would be appointed by the President, to develop a national resilience strategy and operational plan based on input from the interagency groups and others.

Congressional codification of the administration’s climate resilience interagency working groups is the best way to ensure institutionalization of this new resilience muscle—which is exactly what Senators Chris Coons and Lisa Murkowski are proposing in their bipartisan legislation.

The ultimate goal is to assist local communities in addressing their specific needs, with a strong focus on disadvantaged communities that are often disproportionately affected by climate impacts.

Why is the interagency approach so important?

While the federal government has a centralized capability to respond effectively to disasters—for example, the Federal Emergency Management Administration—there is no single federal agency responsible for helping communities develop defensive strategies that will make them more resilient to future climate-related impacts. A true resilience strategy implicates a multitude of different federal agencies and programs, many of which have yet to receive the type of front-line attention associated with classic disaster response operations.

In focusing a “whole-of-government” emphasis on improving resilience to specific climate impacts, the President is constructing a new climate resilience architecture or administrative ecosystem, if you will, in the federal government. It is built around the specific climate hazards that are posing the most severe climate challenges–extreme heat, drought, flood, wildfires, and coastal impacts. Each of these impacts implicates different governmental authorities, resources, and strategies for success.

Why not lump all these issues under a single task force?

That would have been the traditional approach: group all of these resilience issues together under a single White House-led task force of some type. Instead, the National Climate Task Force established individual interagency working groups that focus on the five major climate risks that communities are grappling with.

The task force tapped cabinet secretaries to lead each of the interagency working groups, joined by other agencies that have complementary programs and funding. Agencies that have rarely, or never, worked together to devise longer-term strategies are now pooling funding and deploying expertise to help communities address those needs.

When you attended Stanford Law School in the 1970s, environmental law was still a nascent area. How did you end up focusing on climate, environmental, and clean energy law?

Environmental law was just beginning as an area of study when I was in law school and course offerings were very limited. However, Stanford had then–as it does now–a strong public policy and public service orientation. I had worked in Washington during my college summers and was drawn to the political process and observed the important role that lawyers played in advancing good public policy. While in law school, Professors Paul Brest and Paul Goldstein reinforced my interest in a career path that would veer toward government service and policy issues. I graduated just about the time of the first energy crisis, with the oil embargo, the long gas lines, and all that. I joined a law firm after my clerkship and became fascinated with environmental and energy resource issues, their relationship to national security and economic stability, and their impacts on Americans of all walks of life. While practicing law in this then-new and exciting area, I got involved in pro bono matters and political campaigns and, after Bill Clinton was elected President, had my first opportunity to serve as a political appointee in a Democratic administration.

You graduated from Stanford Law School, came back as a visiting lecturer in 2013, have had various affiliations with Stanford University institutes and now are here at the law school again. What keeps drawing you back?

The interdisciplinary approach that Stanford takes to learning is unique. It is exciting to be in an environment which engages world-class resources from engineering, business, law, and the social sciences to address the most difficult and important issues that confront us in our communities, and across the globe–like climate change. Couple that with the strong public service ethos running through this institution, and it is an ideal place to engage in scholarship and teaching. How can anyone who is lucky enough to be here resist?

Speaking of teaching, can you talk a little about the practicum you are leading?

I will be teaching a law school practicum in the winter and spring quarters that addresses opportunities and pitfalls associated with current efforts to advance “climate-smart” agriculture and forestry practices that reduce greenhouse gas emissions and/or capture and store carbon in soils and biomass. This is an area that is attracting significant public and private investment including, for example, $20 billion in federal dollars in the recently-enacted Inflation Reduction Act. However, data collection and verification techniques to reliably quantify the climate benefits associated with specific agricultural and forestry practices are limited, despite the emergence of promising new technologies and standard-setting opportunities. The practicum will develop recommendations for how to advance the state of knowledge in this area and potentially develop certification or other mechanisms to encourage and validate best practices. The law school will host the practicum, but it also will draw students from other parts of the University, including the new Doerr Sustainability School.

Prior to joining the Biden White House, David Hayes served as Deputy Secretary and Chief Operating Officer at the U.S. Department of the Interior for Presidents Barack Obama and Bill Clinton. Before and between his government service, he held a number of other roles, including as global chair of the Environment, Land and Resources department at law firm Latham & Watkins. He also served as a Stanford Law School lecturer from 2013 to 2017 and has been affiliated with Stanford’s Precourt Institute for Energy and the University’s Woods Institute for the Environment, which put out his recent position paper.

This Q&A with David Hayes by Monica Schreiber originally appeared on the Stanford Law website. Reprinted here (with minor edits) by permission.