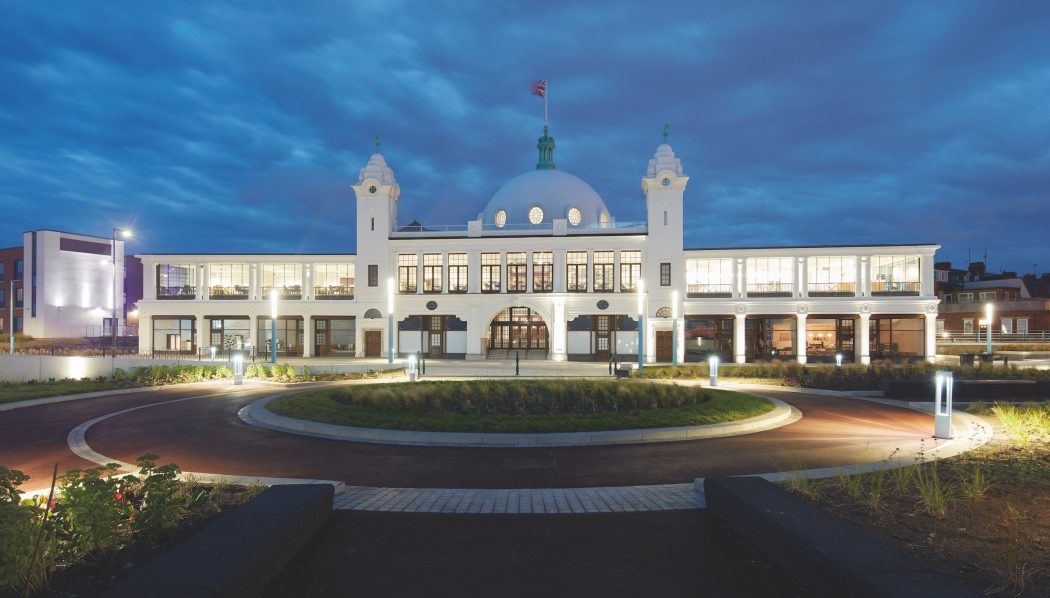 Long-time REVITALIZATION readers might remember that the first one listed above—the Spanish City restoration in Whitley Bay, England—was featured in our December 15, 2015 issue. 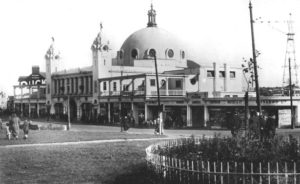 The Spanish City building was designed over a century ago by Newcastle architect Robert Burns Dick, and it opened in 1910. The landmark building had lain vacant and deteriorating for some 16 years at the point when its restoration began.

The Spanish City restoration project is short-listed for both of those categories, which underscores the direct link between restoring our heritage and revitalizing our economies.

This year, ten projects were short-listed in the Excellence in Planning for a Successful Economy category:

And here are the nine projects short-listed in the Excellence in Planning for Heritage and Culture category: 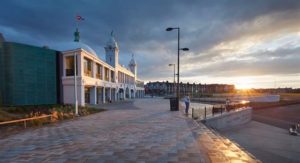 Construction and restoration work was announced as complete on July 17, 2018.  Coastal Communities Minister Jake Berry MP said at that time “We are investing over £250m UK wide through the Coastal Communities Fund to 2020 and it is fantastic to see the Grade II listed Spanish City rightfully restored to its former glory so that it can be enjoyed for generations to come.”

Now restored to it former glory, the Grade II listed building is now expected to become a major tourist attraction in the North East.

Construction company Robertson led the renovation works on site, with architects ADP, using historical images and drawings as reference where original details had been lost. 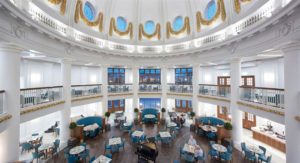 The famous dome’s original features have been reinstated on the promenade elevation, including the first floor loggia terraces, which are located either side of the central arcade, have been fully rebuilt to reflect the original proportions. The new extensions provide additional facilities and support areas.

Meanwhile, the finishing touches have been made to Empress Gardens. Attractive footpaths have been created to make the area more accessible, new street furniture has been installed and the beauty spot boasts new garden spaces with planters, grass and flowerbeds.

Norma Redfearn CBE, Elected Mayor of North Tyneside, said “When I became Mayor one of the first commitments I made was to not give up on the dome. It’s been a long time coming but I am absolutely delighted that it has finally been restored to its former glory and we can now start a new chapter in the rich history of this truly iconic building.”

“This is the culmination of years of hard work by the council, our partners and the community, and it couldn’t have happened without the support of the National Lottery and the Coastal Communities Fund. Robertson and ADP have done a fantastic job in ensuring a sympathetic restoration that stays true to its history while looking firmly to the future and have delivered a high-class venue. We can now look forward to getting Spanish City open again at last and celebrating an exciting future and we wish the operator Kymel well – this is something unique that we can all be proud of and the heart is well and truly back in Whitley Bay,” she added.

The loggia terraces of the seafront-located building have been enclosed with glass so that they can be used all year around, making it ideal for the thousands of visitors that are expected to visit the new site.

Garry Hope, Managing Director of Robertson North East, said “The restoration of such a beautiful and iconic building has been an absolute joy for the team to work on for the last two years. The detail that has been achieved is truly astonishing and I’m sure local residents and visitors to the site will agree.”

The architects, ADP, undertook the architectural and interior design, working closely with the Conservation Te 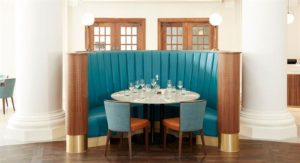 am, to integrate the stunning original features with sympathetic contemporary design.

Roger FitzGerald, Chair of the architects, ADP, said “This project is an exemplar of how historic, iconic buildings in seaside locations can be revitalised by careful restoration and imaginative extensions, thereby ensuring their future viability and helping to regenerate the whole area.”

Visitors will see the central rotunda and gallery space returned to its former glory for the first time in 100 years, thanks to the removal of the inserted first floor.

Kymel, the new operator of Spanish City, has been inspired by the venue’s rich history and the needs and wants of both residents and visitors to the area. New leisure facilities including family-friendly restaurants, fine dining, tearooms, event spaces and a champagne bar will provide visitors the opportunity to enjoy and celebrate the venue.

Kyle Mackings, CEO of Kymel hospitality group, said “We’ve been involved in this project for a number of years now and have seen it evolve into something we’re very proud to be part of. We’re incredibly excited about the completion of building work and the beginning of our journey with our new team. We want to become part of the Whitley Bay community and will be holding lots of exciting public events that we’re looking forward to already. We hope that the venues within Spanish City will provide something different and we can’t wait to welcome everyone.”

Work got underway at Spanish City in September 2016 after the £3.47 million National Lottery grant was secured from the HLF as well as more than £2 million from the Coastal Communities Fund for the project. 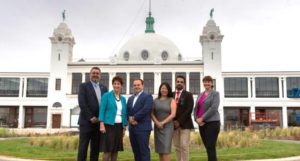 Ivor Crowther, Head of HLF North East, said “This iconic building holds an incredibly special place in the hearts of all of us who live in the North East and beyond. So it’s fantastic to see its revival and its return to its place at the heart of Whitley Bay’s life and economy. Thanks to National Lottery players, time enjoyed at Spanish City no longer has to exist in memories.”

The refurbishment to Spanish City is part of the wider changes taking place along the seafront as part of the council’s £36 million Whitley Bay Seafront Master Plan, aimed at making the area even more attractive to visitors, residents and businesses.

Patrick Melia, North Tyneside Council’s Chief Executive, said “This has been a fantastic project which has been successfully delivered thanks to our partnership working – we’ve also had great support from the public throughout. It is an exciting time for Whitley Bay, and residents and businesses, and the future looks extremely bright. Spanish City is a fantastic venue which will be enjoyed by all.”

REVITALIZATION offers congratulations to the North Tyneside Council, ADP and everyone who worked on this wonderful restoration of Spanish City!

Unless otherwise credited, all photos are courtesy of ADP Architects.