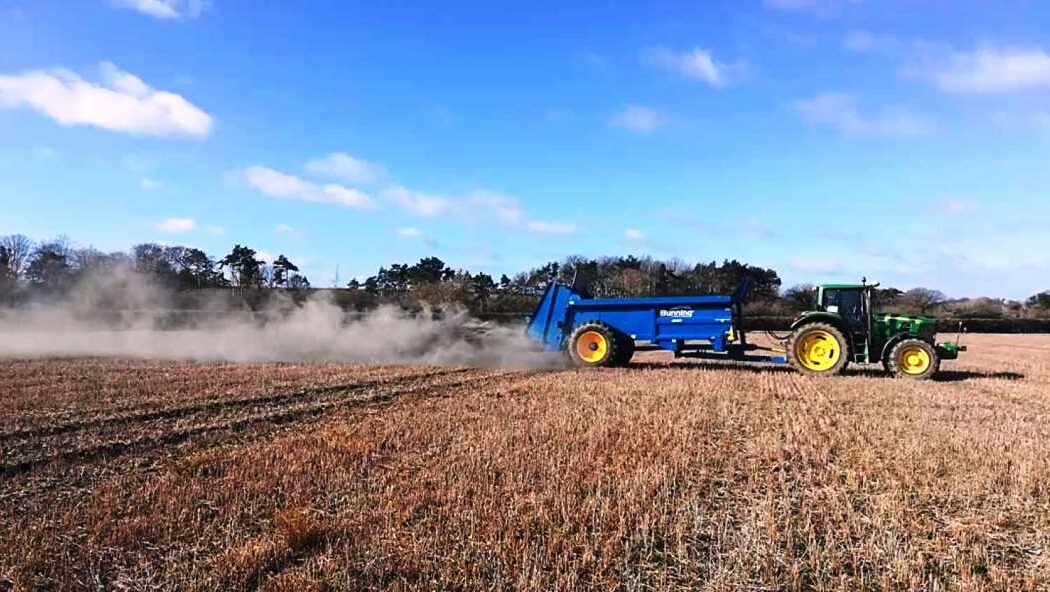 Adding crushed rock dust to farmland could draw down up to two billion tonnes of carbon dioxide (CO2) from the air per year and help meet key global climate targets, according to a major new study led by the University of Sheffield.

The technique, known as enhanced rock weathering, involves spreading finely crushed basalt, a natural volcanic rock, on fields to boost the soil’s ability to extract CO2 from the air.

In the first nation-by-nation assessment, published in Nature, scientists have demonstrated the method’s potential for carbon drawdown by major economies, and identified the costs and engineering challenges of scaling up the approach to help meet ambitious global CO2 removal targets. The research was led by experts at the University of Sheffield’s Leverhulme Centre for Climate Change Mitigation, and the University’s Energy Institute.

Professor David Beerling, Director of the Leverhulme Centre for Climate Change Mitigation at the University of Sheffield and lead author of the study, said: “Carbon dioxide drawdown strategies that can scale up and are compatible with existing land uses are urgently required to combat climate change, alongside deep and sustained emissions cuts.”

“Spreading rock dust on agricultural land is a straightforward, practical CO2 drawdown approach with the potential to boost soil health and food production. Our analyses reveal the big emitting nations – China, the US, India – have the greatest potential to do this, emphasising their need to step up to the challenge. Large-scale Research Development and Demonstration programmes, similar to those being pioneered by our Leverhulme Centre, are needed to evaluate the efficacy of this technology in the field,” he added.

Meeting the Paris Agreement’s goal of limiting global heating to below 2C above pre-industrial levels requires drastic cuts in emissions, as well as the active removal of between two and 10 billion tonnes of CO2 from the atmosphere each year to achieve net-zero emissions by 2050. This new research provides a detailed initial assessment of enhanced rock weathering, a large-scale CO2 removal strategy that could make a major contribution to this effort.

The authors’ detailed analysis captures some of the uncertainties in enhanced weathering CO2 drawdown calculations and, at the same time, identifies the additional areas of uncertainty that future work needs to address specifically through large-scale field trials.

Professor James Hansen, a partner in the study and Director of the Climate Science, Awareness and Solutions Program at Columbia University’s Earth Institute, said: “We have passed the safe level of greenhouse gases. Cutting fossil fuel emissions is crucial, but we must also extract atmospheric CO2 with safe, secure and scalable carbon dioxide removal strategies to bend the global CO2 curve and limit future climate change. The advantage of CO2 removal with crushed silicate rocks is that it could restore deteriorating top-soils, which underpin food security for billions of people, thereby incentivising deployment.”

The study showed that China, the United States and India – the highest fossil fuel CO2 emitters – have the highest potential for CO2 drawdown using rock dust on croplands. Together, these countries have the potential to remove approximately 1 billion tonnes of CO2 from the atmosphere, at a cost comparable to that of other proposed carbon dioxide removal strategies (US$80-180 per tonne of CO2).

Indonesia and Brazil, whose CO2 emissions are 10-20 times lower than the US and China, were also found to have relatively high CO2 removal potential due to their extensive agricultural lands, and climates accelerating the efficiency of rock weathering.

Professor Steven Banwart, a partner in the study and Director of the Global Food and Environment Institute, explained: “The practice of spreading crushed rock to improve soil pH is commonplace in many agricultural regions worldwide. The technology and infrastructure already exist to adapt these practices to utilise basalt rock dust. This offers a potentially rapid transition in agricultural practices to help capture CO2 at large scale.”

The scientists suggest that meeting the demand for rock dust to undertake large-scale CO2 drawdown might be achieved by using stockpiles of silicate rock dust left over from the mining industry, and are calling for governments to develop national inventories of these materials.

Calcium-rich silicate by-products of iron and steel manufacturing, as well as waste cement from construction and demolition, could also be processed and used in this way, improving the sustainability of these industries. These materials are usually recycled as low value aggregate, stockpiled at production sites or disposed of in landfills. China and India could supply the rock dust necessary for large-scale CO2 drawdown with their croplands using entirely recycled materials in the coming decades.

The technique would be straightforward to implement for farmers, who already tend to add agricultural lime to their soils. The researchers are calling for policy innovation that could support multiple UN Sustainable Development Goals using this technology. Government incentives to encourage agricultural application of rock dust could improve soil and farm livelihoods, as well as reduce CO2, potentially benefiting the world’s 2.5 billion smallholders and reducing poverty and hunger.

Professor Nick Pidgeon, a partner in the study and Director of the Understanding Risk Group at Cardiff University, concluded: “Greenhouse gas removal may well become necessary as we approach 2050, but we should not forget that it also raises profound ethical questions regarding our relationship with the natural environment. Its development should therefore be accompanied by the widest possible public debate as to potential risks and benefits.”

Photo courtesy of the University of Sheffield.